At least 14 people have been killed and more than a dozen injured following the collapse of a bridge which triggered a stampede during a Hindu festival in the eastern Indian city of Patna, officials say.

Jayant Kant, a police superintendent in Patna, said Monday’s stampede occurred when a makeshift bridge erected to help people reach the Ganges river gave way under the weight of devotees rushing to offer prayers to the setting sun as part of an annual Hindu religious ritual.

Most of the casualties are thought to have been the result of the stampede and not the collapse of the low-slung bamboo-and-rope bridge designed to help worshippers cross rough terrain.

“Ten women and eight children are among those killed,” Kant said, adding the toll was likely to go up as several other Hindu devotees were reported missing at the site.

“When the bridge collapsed, power cables strung on it snapped and lights went off and in the darkness people scrambled which triggered the stampede,” Singh told AFP.

Patna is capital of the eastern Indian state of Bihar, where the annual Chhath festival dedicated to the Hindu Sun God is popular.

Stampedes often break out at religious events in India where policing and crowd control are often inadequate.

A stampede at a religious celebration killed nine people, eight of them women, in the neighbouring state of Jharkhand in September.

And in November last year, 16 people were crushed to death and dozens of others injured in another stampede at a religious festival close to the Ganges river in northern India.

The worst recent incident was in October 2008 when around 220 people died near a temple inside a famous fort in the northern Indian city Jodhpur. 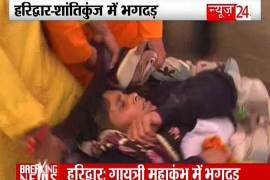 Incident during religious ceremony on the banks of Ganges River in Haridwar leaves at least 16 people dead. 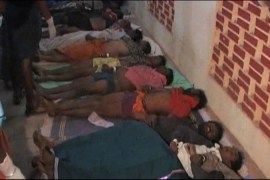 Authorities say more than 100 Hindu pilgrims have died after stampede in southern state of Kerala.