At least 50 people, mostly children, have been killed in Egypt after a speeding train crashed into a school bus carrying children to their kindergarten.

Up to 17 were also wounded in the crash on Saturday as the bus crossed tracks near a village in Manfaloot district in the southern province of Assiut, 300km south of Cairo.

The 60 passengers on the bus were mostly children aged between four and six years old.

Following the incident, Mohamed Rashad, the transport minister, and the head of the railways authority submitted their resignations.

Egyptian President Mohamed Morsi pledged to hold those responsible to account and ordered the prime minister, the ministers of defence and health and the Assiut governor “to offer all the assistance to the families of the victims”, the official MENA news agency said.

The provincial governor said a guard responsible for monitoring the crossing point fell asleep, leaving the boom open when it should have been shut.

The man has reportedly been detained.

Witnesses confirmed that barriers at the crossing were open when the train hit the bus pushing it along the tracks for nearly a kilometre.

Al Jazeera’s Sherine Tadros, reporting from Cairo, said the impact of the crash was so powerful that “only 22 bodies or so came out in full and the rest were in [pieces].

“That is why it’s difficult for the rescuers to operate in the area.”

Books, schoolbags and socks belonging to children were strewn along the tracks near the mangled bus.

Two hospital officials said the wounded were being treated in two different facilities, many with severed limbs.

The governor said a guard responsible for monitoring the crossing point fell asleep, leaving the boom open when it should have been shut. The man has reportedly been detained. 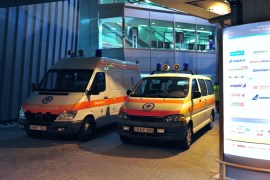 At least 11 Hungarians killed after their bus overturns in a resort town on the Red Sea. 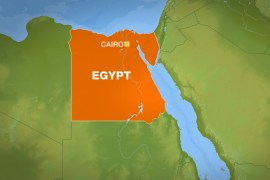 More than a dozen people injured as train derails and reportedly catches fire near Cairo.