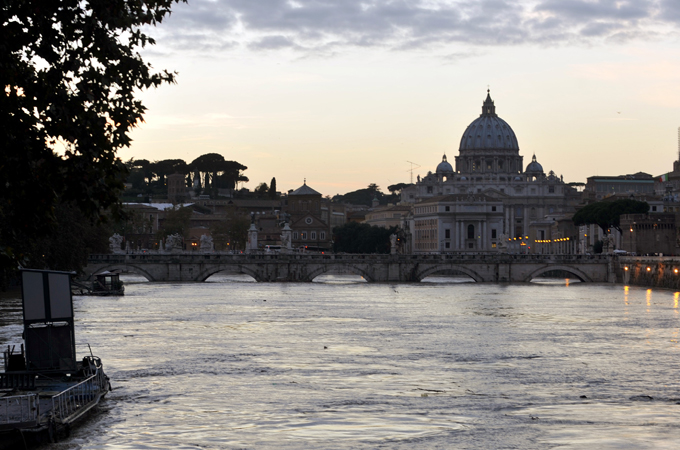 A view of the Vatican and the Tiber River after flooding struck the northern outskirts of Rome on Wednesday, November 14. [AFP]

Heavy rain across central Italy has caused flooding across the northern outskirts of Rome. Meanwhile, the historic city of Venice and popular tourist regions of Tuscany and Umbria are now counting the costs of extensive flood damage further north.

The Tiber River which snakes through the capital burst its banks in some areas, tearing boats from their moorings and sweeping debris into the current. This was mainly to the north of the city where the Aniene River also overflowed flooding farmland and parts of some smaller towns and villages.

As the Tiber’s muddied waters rose they also filled some of the supporting arches of the Ponte Milvo (Milvian Bridge), one of Italy’s most historic bridges. In the process it threatened to engulf the pedestrian walkway and submerging trees. Central Rome itself has been spared thanks to its high embankment walls.

This latest round of storms, hit northern and later central Italy during the weekend, causing huge amounts of damage, washing out roads and cutting off towns in southern Tuscany. It is estimated that the floods and landslides may have caused up to 100 million euros in damage to agriculture.

The lagoon city of Venice suffered some of its worst flooding in 150 years. St Mark’s Square and other low-lying areas were under so much water that some tourists were able to swim there. The rivers are expected to remain swollen for several days yet, but will slowly recede as drier, brighter weather spreads south from central Europe.