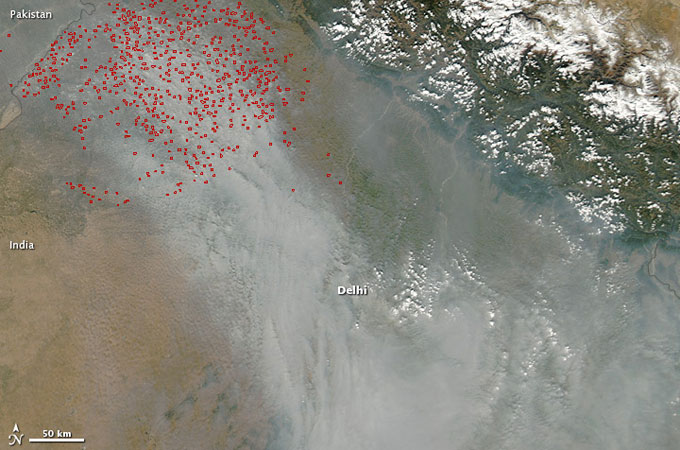 The India capital, New Delhi, is in the grips of smog which threatens to worsen as Diwali firework celebrations take place on Tuesday 13 November.

Visibility across Delhi has been between 1000 and 4000 metres over the last week and despite clearer conditions on Friday, the poor visibility returned over the weekend.

The term ‘smog’ originally referred to a combination of industrially-produced smoke and fog, the best example of which was the ‘pea-soupers’ of 19th and early 20th century London.

Modern smog, which affects many large cities, such as Mexico City, Santiago, Los Angeles and Delhi, largely results from the interaction of vehicular emissions, industrial pollution and sunlight which results in a photochemical smog.

It is an undeniable fact that Delhi’s pollution problems are, in part, due to its chronic traffic problem. The city has more than 7 million motor vehicles registered and projections suggesting that vehicle numbers will double by 2020.

Despite a new metro system, public transport is failing to keep up with the demands of the burgeoning population. Low average traffic speeds and the use of adulterated blended fuels add to pollution levels.

Despite this, a row seems to be brewing as to the actual cause of the current smog. Delhi’s chief minister, Sheila Dikshit, has claimed that the latest woes are, in fact, the result of stubble fires across Punjab and Haryana.

Whilst satellite imagery does seem to lend support to her claims, the governments of both regions have denied any responsibility.

Nevertheless, both states have been directed to ensure a complete ban on stubble burning within the next two years.

In the meantime, it is anticipated that settled weather conditions and Diwali celebrations will worsen the situation.

Fireworks are a major feature of Diwali celebrations and the smoke is likely to lower the visibility and the air quality even further over the coming week.