Syria’s opposition appears to have overcome its deep divisions to rally behind a new leader within a new coalition that its Western and Arab backers hope can topple the Syrian government and take over the country.

After days of negotiations in Qatar under the watchful eyes of Arab, US and other officials, representatives of groups including rebel fighters, veteran dissidents and ethnic and religious minorities agreed on Sunday to join a new assembly that can form a government-in-exile.

Khatib, a preacher who was once imam of the ancient Umayyad Mosque in Damascus, immediately called on soldiers to quit the Syrian army and on all sects to unite.

“We demand freedom for every Sunni, Alawi, Ismaili [Shia], Christian, Druze, Assyrian … and rights for all parts of the harmonious Syrian people,” he said.

It remains to be seen whether the Syrian National Coalition for Opposition and Revolutionary Forces can overcome the mutual suspicions and infighting that have weakened the 20-month-old drive to end four decades of rule by Assad’s family.

But for allies who see it emulating Libya’s Transitional National Council, the deal was welcome on a day when Israel fired a missile after a Syrian mortar bomb hit the Golan Heights and Assad’s air force strafed along Turkey’s border.

“We will strive from now on to have this new body recognised completely by all parties … as the sole legitimate representative of the Syrian people,” Hamad bin Jassim Al Thani, Qatari prime minister, said.

Qatar, the meeting’s hosts, is an important supporter of the rebels.

Ahmed Davutoglu, Turkey’s foreign minister, said there was “no excuse any more” for foreign governments not to support an opposition whose internal divisions had given many pause.

The US had also strongly promoted the plan for the Doha meeting to unite the various factions and, notably, subsume the previously ineffectual Syrian National Council into a wider body that would be more inclusive of minorities from a country of great ethnic and religious diversity.

Earlier on Sunday, Al Jazeera’s Mohamed Vall, reporting from the Doha meeting venue, said: “We also know that this name – the Syrian National Coalition – will also change because they do not want it to sound like Syrian National Council when reduced to its acronym of SNC.

“There is also a longer version of the name, which is: The National Coalition of the Syrian Revolutionary Forces and the Opposition”.

He said the Kurdish National Council asked for 48 hours to consult their leaders outside of Qatar.

France, a vocal backer of the rebels and which once ruled Syria, lauded the Doha deal.

“France will work with its partners to secure international recognition of this new entity as the representative of the aspirations of the Syrian people,” Laurent Fabius, French foreign minister, said in a statement in which he called the Assad government “the criminal regime in Damascus”.

Twenty months after street demonstrations inspired by the Arab Spring drew a military response from Assad, his enemies hope a more cohesive opposition can break a stalemate in the civil war and win more military and diplomatic support from allies who have been wary of the influence of anti-Western fighters, some of them linked to al-Qaeda.

While there has been renewed talk in Turkey and elsewhere of providing some sort of no-fly zones or other protection for refugees and the lightly armed rebels facing Assad’s air force, Western governments have shown little appetite for new military ventures in such a complex Arab state.

And Russia and China, which have blocked previous moves against Assad in the United Nations Security Council, are unlikely swiftly to alter positions which call for dialogue with Assad and view opposition groups as being in thrall to the West.

Regional power Iran, in whose Shia brand of Islam Assad’s Alawite minority has its religious roots, remains firmly behind the Syrian leader in a conflict which pits him against majority Sunni Muslims supported by Iran’s Sunni Arab adversaries.

After long arguments over whether and how to form the new opposition assembly, the speed with which a consensus emerged within hours to ensure that Khatib stood unopposed for the post of president was notable and may encourage its supporters.

His deputies will be Riad Seif, a veteran dissident who had  proposed the US-backed initiative to set up an umbrella group uniting groups inside and outside Syria, and Suhair al-Atassi, one of the relatively few women with a leading role.

The new leader of the Syrian National Coalition for Opposition and Revolutionary Forces was born in 1960, in Damascus.

He studied and worked as an engineer, but rose to prominence as an Islamic preacher; at one point, he was the imam of the historic Umayyad mosque in Damascus.

He eventually fled from Damascus to Cairo after his release.

In a speech last month, Khatib was critical of the role Islamists have played in the Syrian uprising, though his critique was mostly strategic: their prominence has allowed Western countries to portray the uprising as “extremist,” he said.

Delegates said a third deputy may yet be named from among ethnic Kurds.

Al Jazeera’s Hashem Ahelbarra, also reporting from the Doha conference venue, said the coalition had said that as soon as they received “full recognition from the international community, they will announce a provisional government”.

“Ideally they say they will ask the international community to provide them with a humanitarian corridor, a no-fly zone in the northern parts of the country, preferably in Idlib province or in Aleppo, but they say that they practically need a month or two before being able to move to that area, to set up their provisional government,” he said.

“This is a serious step against the regime and a serious step towards freedom,” George Sabra, the new Syrian National Council leader, said of Khatib, who has long promoted a liberal Islam tolerant of Syria’s Christian, Alawite and other minorities.

Critics of the SNC had said it was too much influenced by the Sunni Islamist Muslim Brotherhood and too little open to minorities, including Alawites, some 10 per cent of the population who fear a backlash if Assad is overthrown after a war that has taken on increasingly sectarian characteristics.

In a sign of the wider sectarian confrontation across the Middle East, three people were killed on Sunday in the Lebanese coastal city of Sidon in fighting between Sunni Islamists and Hezbollah, the Iranian-backed Lebanese Shia group.

In the Golan Heights, Israeli troops fired a guided missile into Syria on Sunday in a potent “warning shot” after mortar fire from fighting between Syrian troops and rebels hit the Israeli-occupied territory for the second time in four days.

Israel Radio said it was the first direct engagement of the Syrian military on the Golan since the war of 1973.

There was no immediate comment from the 1,000-strong UN force which patrols the area, and no reaction from Syria.

In other violence, Assad’s troops bombarded the Ras al-Ain area on the border with Turkey, days after the town fell to rebels during an advance that has sent thousands of refugees fleeing for safety.

Increasingly critical of the failure of world powers to halt the war, Turkey is in discussions with its NATO allies over the possible deployment of Patriot surface-to-air missiles to defend against any spillover of violence. The move could also be a step towards enforcing a no-fly zone within Syria.

More than 37,000 people have been killed and many tens of thousands more displaced in the violence since March last year, according to Syrian activists. 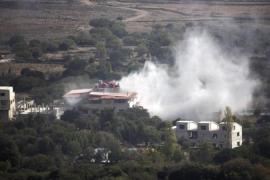 PM warns of Golan retaliation after mortar round lands at Israeli army post, as violence rages on Syrian-Turkish border. 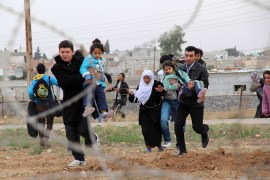 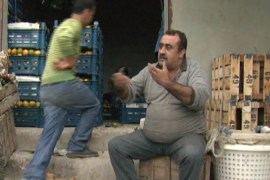