A grenade attack on a church has killed one police officer and left 14 other people wounded in the eastern Kenyan town of Garissa, near the Somalia border, police say.

Regional police chief Philip Tuimur confirmed the incident, saying that emergency response operations were underway. “We have mobilised our officers to track down the attackers,” he said. “We have one fatality.”

Another police officer who asked not to be named said that three of those wounded were in critical condition.

The grenade “ripped through the roof during prayer session,” a police source told the AFP news agency. The officer said the church was located inside a police camp.

Al Jazeera’s Nazanine Moshiri, reporting from the Kenyan capital of Nairobi, said that while no one has claimed responsibility for the attack but that Kenya has been hit by a string of grenade attacks and fingers are being pointed at sympathisers of al-Shabab, Somalia’s extremist rebel group which has links to al-Qaeda.

Al-Shabab has vowed to carry out attacks on Kenya because it sent army troops into Somalia last year to fight the rebels, who are considered a threat to Kenya’s security because they have been blamed for kidnapping foreign tourists and aid workers in Kenya.

At least 18 people were killed in attacks on two churches in the same town in July. 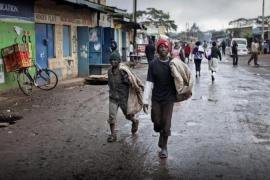 Kenya and its coastal discontents

Kenya must make serious commitments to unravel the economic grievances upon which the secessionist argument is based.