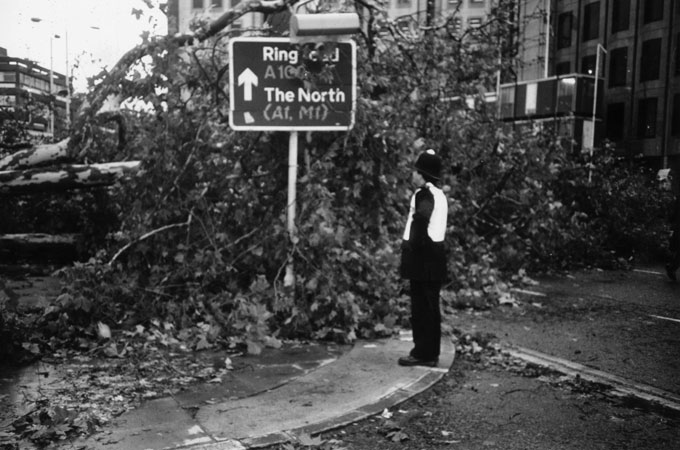 Earlier on today, apparently, a woman rang the BBC and said she heard there was a hurricane on the way; well, if you’re watching, don’t worry, there isn’t, but having said that, actually, the weather will become very windy, but most of the strong winds, incidentally, will be down over Spain and across into France.

Those words will forever haunt BBC Weather forecaster Michael Fish, for just 24 hours after delivering his forecast to millions of television viewers, much of the southern half of the UK had been devastated by the worst Atlantic storm in living memory.

As we approach the 25th anniversary of what has become known as ‘The Great Storm’ we can now look back at what was to be seen as a key event in the history of weather forecasting.

When the storm began to sweep away on the 16th October 1987 there was shock and bewilderment at the damage that Mother Nature could still wreak in ‘this day and age’.

Certainly, the extent of the damage made this the worst storm to hit the south of the country (Scotland has always been more familiar with exceptional storm systems) in more than 250 years.

Winds of 190kph hit a swathe of southern England from Sussex to Essex and Kent. The highest officially recorded wind speed was 196kph at Gorleston in Norfolk. But it is likely that in some places winds exceeded 200kph.

What made the storm particularly devastating was the combination of southerly winds (the prevailing wind direction here is southwesterly); a mild spell during the preceding weeks which left trees in full leaf; and a wet early autumn which left roots weakened in waterlogged conditions.

This unfortunate combination of factors resulted in the downing of around 15 million trees, including many in Hyde Park, Kew Gardens and, ironically, the Met Office’s training college near Reading. The town of Sevenoaks in Kent lost 6 of its famous oaks during the storm.

With so many falling trees it is hardly surprising that many buildings were damaged and there was widespread loss of power. More power lines were brought down across southeast England on the night of the 15th than in the previous ten years.

Thankfully, with the peak of the storm occurring during the early hours of the 16th, many people were asleep, or at least in their beds. Consequently, the death toll was ‘only’ 18 (plus another 4 in France).

When the dust – and debris – had finally settled, there were two questions on everyone’s lips: “Why weren’t we warned?” and “Why wasn’t the ‘hurricane’ forecast?”

In the immediate aftermath, the event was being described as a hurricane. Indeed, the winds were of hurricane strength, but this was a frontal depression, albeit an exceptional one.

The developing storm system had been picked up by the Met Office’s supercomputer several days previously but nearer to the event the picture became less certain and it appeared the storm would merely skim across the south coast.

Weather forecasts on the evening of the 15th October mentioned heavy rain and strong winds but no indication had been given that a ‘once in a lifetime’ event was about to occur. But as the storm was being monitored, warnings were issued to the London Fire Brigade and the Ministry of Defence.

One consequence of the storm was a review and a subsequent complete overhaul of the nature of weather warnings and the way they are disseminated to the public and authorities.

The main issue, of course, was how to ensure that such a ‘missed’ forecast did not occur in future. To this end, a network of weather buoys was established around the coast of the UK as it was decided that a lack of reliable weather data in the Southwest Approaches had been a key factor in the supercomputer failing to resolve the depth of the storm.

Much research into the very nature of weather depressions was carried out and developments in the analysis of satellite imagery allowed forecasters to spot storms which were likely to deepen ‘explosively’.

In fact, what was thought to be a ‘once in a lifetime’ event happened less than three years later when the Burn’s Day Storm struck on the 25th and 26th January 1990. Named after the Scottish poet Robert Burns because its arrival coincided with his birthday, its central pressure was much lower than that of the Great Storm (949mb compared with 964mb).

Thankfully, this storm was accurately predicted and it was agreed that weather forecasting had learned from the death and destruction that had occurred on the night of The Great Storm.