A court in London has ruled that three elderly Kenyans who claim they were tortured in the 1950s have the right to sue the British government.

Wambugu Wa Nyingi, Paulo Muoka Nzili and Jane Muthoni Mara claim that they were tortured by colonial forces during the Mau Mau uprising. Nzili says that he was castrated; Mara, that she was sexually assaulted.

The high court ruled last year that the complainants do, in fact, have “arguable cases in law” against the British government. Today’s ruling focused on time: The British government has already admitted that its forces committed acts of torture. It argued, however, that the statute of limitations has lapsed – that the cases happened too long ago to bring to trial.

The court ruled on Friday that “a fair trial on this part of the case does remain possible, and that the evidence on both sides remains significantly cogent for the court to complete its task satisfactorily.”

The UK’s foreign office said in a statement that it was “disappointed” with the ruling, which could have “potentially significant and far reaching legal implications.”

At the same time, we do not dispute that each of the claimants in this case suffered torture and other ill treatment at the hands of the colonial administration,” the statement acknowledged.

A fourth complainant died while waiting for the case to reach trial.

Atrocities on both sides

Britain could attempt to resolve the case before trial by settling out of court. It is estimated that hundreds, if not thousands of former Mau Mau members could have claims against the British government.

The Mau Mau uprising was an anti-colonial conflict which took place in Kenya during the 1950s and ended with Kenya’s independence in 1963.

Both sides committed atrocities, including several massacres of civilians carried out by Mau Mau fighters. British forces in Kenya detained tens of thousands of members of the Kikuyu ethnic group, from which the Mau Mau originated; many were held for years without trial.

More than 10,000 members of the group were killed, along with several hundred colonial security forces.

The group was banned in Kenya until 2004, which may explain why it took so long for members to bring complaints against the British government. 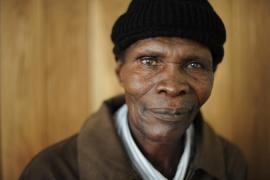 Scores were forced into detention camps and tortured by the British army in the 1950s. 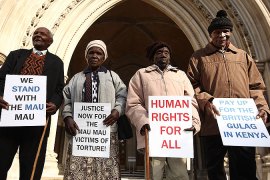 Veterans of Kenya’s Mau Mau uprising will delay a lawsuit against Britain and allow London time to apologise and pay compensation for alleged colonial-era atrocities, their lawyers have said.