Among the dead in Wednesday’s blasts were seven women and three children, the interior ministry said.

“Today at around 9am [0430 GMT] a roadside bomb blew up a civilian truck in Musa Qala that killed 10, including seven young women and three children.” provincial spokesman Farid Ahmad Farhang told the AFP news agency.

Another woman and a man were wounded in the Helmand province attack.

Hours later, a second device destroyed a civilian motorcycle, killing a man and wounding a woman and three children — all members of the same family — Farhang said.

The government in Lashkar Gah, the provinicial capital, blamed the Taliban for the improvised explosive devices, IEDs, but no group has claimed responsibility yet.

The crude devices, often built on old ammunition, are planted by the side of roads to target NATO and Afghan troops.

The UN says 1,145 civilians were killed in the Afghan war in the first six months of this year, blaming 80 per cent of the deaths on fighters – more than half of those caused by roadside bombs.

Also on Wednesday, seven policemen were killed in an attack on a checkpoint in Zabul province.

Police officials, who called the attacker a “Taliban infiltrator”, said he fled the Shah Joy district scene with weapons he seized from the slain policemen.

Both developments come as the independent election commission officially announced April 5, 2014, as the date of the next presidential election in the Central Asian nation.

Fazel Ahmad Manawi, chief of the Independent Election Commission, said on Wednesday that provincial elections would take place on the same day.

Manawi, speaking in Kabul, said: “we are even prepared to pave the ground for the armed opposition, be it the Taliban or Hezb-e-Islami, to participate in the election, either as voters or candidates”.

“There will be no discrimination,” the IEC chief added.

In the case of no presidential candidate securing more than 50 per cent of the vote, a May 22, 2014, runoff will be implemented. 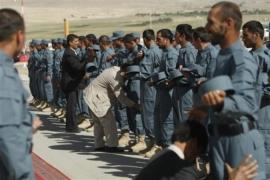 French soldiers train recruits to implement rule of law ahead of their withdrawal this year. 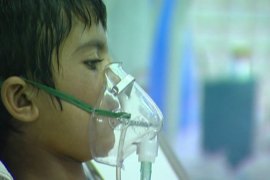 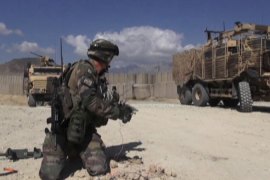 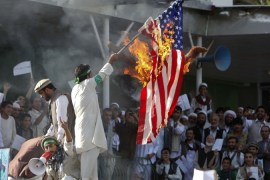