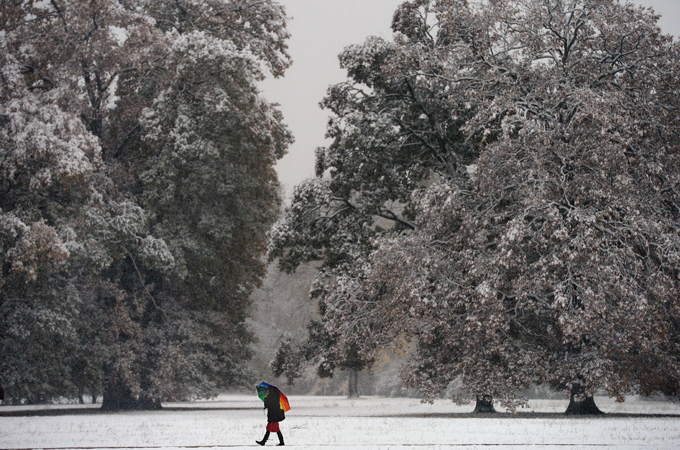 A woman takes a walk in a snow-covered park in Weimar, eastern Germany where temperatures plunged below freezing. [AFP]

An early cold snap has brought snow and freezing temperatures to parts of Germany. This unusually early spell of wintry weather caused numerous traffic accidents in the eastern federal states of Thurinigia and Saxony.

Oberwiesenthal in Saxony recorded 20 cm of snow while the Ore Mountain area of Thuringia had a covering of 18cm of snow. Similar conditions were also seen in the federal state of Hesse along with some areas in the north of the country.

This is the first heavy snowfall of the season, and it left highway workers busy clearing roads and cutting down tree branches left sagging under the weight of the heavy and wet snow.

The situation developed as mild air swept in from the Atlantic across the Iberian Peninsula, and into southern France. Nice had 62 mm of rain in 24 hours.

The heavy rain then ran into a cold plunge of air across northern and central Europe. Here temperatures are well down into single figures.

The heavy rain and mix of snow is currently crossing the Alps and the Balkans. Nova Gorica in Slovenia had 162 mm of rain on Saturday. Meanwhile Ivan Sedlo in Bosnia and Herzegovina recorded 123mm of rain during the same time period.

The snow is expected to melt at lower levels, but at altitudes above 350 m, we should see a good base being set for the forthcoming skiing season.