Hurricane Sandy has closed in on the US, threatening to smack the eastern third of the country with torrential rains,
high winds, major flooding and power outages a week before the US presidential election.

Following the track projected by forecasters on Saturday, Sandy could make US landfall on Monday night or Tuesday anywhere between Maryland and southern New England.

Rain accumulations of up to 30cm and heavy snowfall inland are considered likely in some areas.

As it merges with an Arctic jet stream, Sandy has all the ingredients to transform into a “super storm” unlike anything seen over the Eastern Seaboard in decades. It is a slow-moving system with tropical storm-force winds extending across 1,050km.

Forecasters said its flooding impact could span multiple tides with a storm surge of 1.2m to 2.4m in Long Island Sound, the southern portion of Lower New York Bay and Delaware Bay.

“This is going to go well inland,” Federal Emergency Management Agency (FEMA) Administrator Craig Fugate said, warning of the potential for flooding in Maryland and Pennsylvania, as well as more than a half-metre of snow in West Virginia.

Al Jazeera’s Jay Gray in Rehoboth, Delaware,said that up and down the east coast communities are preparing for the storm.

“This is a massive system that is going to affect several states,” Gray said. “Eight [and Washington DC] are under a state of emergency.”

Officials have urged residents to stock up on food, water and batteries.

That threat was described in a blog posted on Weather Underground by veteran weather forecaster Bryan Norcross as “serious as a heart attack for anybody near the rising water”.

Sandy claimed at least 59 lives as it made its way through the Caribbean islands, including 44 people in southern Haiti, mostly from flash flooding and mudslides, according to authorities.

Another 11 people died in Cuba, largely due to collapsed buildings, officials said.

Coming in the hectic run-up to the November 6 election, the storm presented a challenge to the campaigns of President Barack Obama and Republican challenger Mitt Romney.

As Sandy approached, Romney was rescheduling all of his campaign events planned for Virginia on Sunday and flying to Ohio instead.

Ahead of the election, millions of Americans are taking advantage of early voting arrangements to cast their ballots.

State officials said they have put in place contingency plans in case Sandy caused extended power outages or other problems that could disrupt voting.

The White House said Obama convened a call with Homeland Security Secretary Janet Napolitano, FEMA’s Fugate and other officials to receive a Saturday update on ongoing government actions to prepare for the storm.

Officials said 50 to 60 million people could be affected by Sandy, which many forecasters warn could be more destructive
than Irene, which caused billions of dollars in damage in August 2011.

“People should be ready for the possibility of power outages paired with cold temperatures. Now is the time to prepare,” Fugate said.

In New York, authorities were considering closing down the city’s buses, subways, commuter railroads, bridges and tunnels in preparation for the storm’s arrival.

A potential shutdown could begin at 7:00pm on Sunday, when the last commuter trains would depart, with the entire system to be closed down by 3:00am Monday, officials said.

The storm picked up a little forward speed but was still moving slowly over the Atlantic at 20kph.

Tropical storm-force winds were being felt near the North Carolina coast. There were tropical storm warnings for all of
the coastal portion of the state, along with about half of South Carolina. 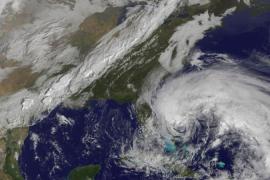 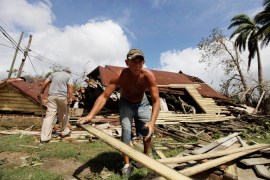 Heading towards the US East Coast, Sandy could morph into a catastrophic blend of tropical cyclone and winter storm.