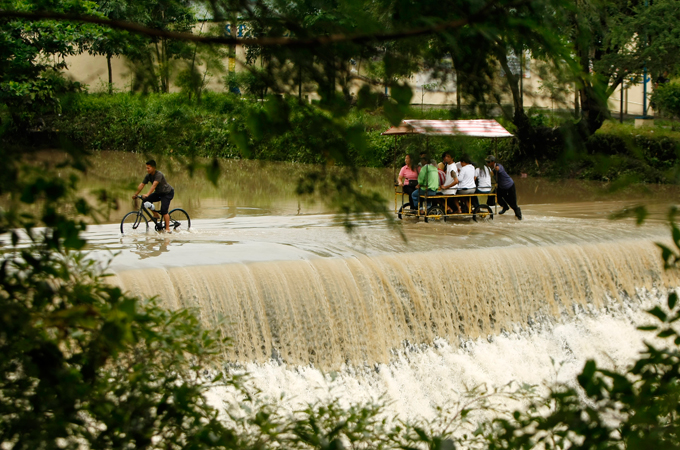 Filipino residents cross a swollen river in Las Pinas city to the south of Manila in the Philippines. [EPA]

At least 24 people are now known to have died as a result of Tropical Storm Son-Tinh in the Philippines. Six others still remain missing.

Son-Tinh has battered more than 30 provinces in the central, eastern and southern Philippines. In the process, many areas suffered prolonged power outages.

Government sources revealed that 11 people died as result of drowning and landslides. The other 13 victims were carried away by flash floods, hit by falling trees and flying debris or were electrocuted.

More than 15,000 have been displaced by the storm and are still sheltering in government evacuation centres. Food and other forms of aid were given to a further 40,000 people who were able to remain in their own homes.

Son-Tinh has since crossed the South China Sea and is now passing to the south of Hainan. It still packs winds of 140 kph with gusts approaching 170 kph.

The storm is expected to make landfall just to the south of Hanoi around 0600GMT on Sunday October 28. Thereafter it will weaken rapidly in terms of the winds, but flooding rains are very likely.

Much of northern Vietnam will be affected by the system. Some areas could see over 200mm of rain over the next 36 to 48 hours. Widespread disruption does seem to be inevitable.