Hurricane Sandy, a late-season Atlantic cyclone that threatens to be one of the worst storms to hit the US Northeast in decades, has moved slowly northward after killing at least 41 people in the Caribbean.

The storm system regained hurricane strength by 12:00 GMT on Saturday, after flagging wind speeds earlier in the day triggered a downgrade to a tropical storm, the US National Hurricane Centre (NHC) said.

At that time, the NHC said that the storm’s top sustained winds of 120kph made it a weak category one hurricane.

The massive storm, with a rapidly expanding wind field, was located about 540km southeast of Charleston, South Carolina, and moving on a north-northeast track toward its expected landfall early next week on the northeast US coast.

Forecasters said wind damage, widespread and extended power outages and coastal and inland flooding were anticipated across a broad swathe of the densely populated east coast when Sandy makes landfall.

“We’re expecting a large, large storm. The circulation of this storm as it approaches the coast could cover about the eastern third of the United States,” said Louis Uccellini, director of the National Oceanic and Atmospheric Administration’s Centers for Environmental Prediction.

He stopped short of calling Sandy possibly the worst storm to hit that part of the country in 100 years, as some weather watchers were doing, but said Sandy was shaping up to go down as a storm of “historic” proportions.

The late-season hybrid storm has been dubbed “Frankenstorm” by some weather watchers because it will combine elements of a tropical cyclone and a winter storm. Forecast models show it will have all of the ingredients to morph into a massive and potentially catastrophic “super storm”.

In New York City, the global financial hub, officials were considering closing down mass transit before the storm hits.

The US Navy ordered all ships in the Norfolk, Virginia, area, including a nuclear-powered aircraft carrier, out to sea to ride out the approaching storm.

Coming in the final weeks before the US presidential election on November 6, the storm could throw last-minute campaign travel plans into chaos.

An aide to Republican presidential challenger Mitt Romney said he had cancelled a campaign event scheduled for Sunday night in Virginia Beach, Virginia.

The Democratic incumbent was travelling to New Hampshire on Saturday, and on Monday was due to visit Youngstown, Ohio, and Orlando, Florida.

Craig Fugate, director of the Federal Emergency Management Agency, said he and the head of the US National Hurricane Center had briefed the president on preparations for the storm on Friday morning.

“His direction to us again, as always, is to make sure we are prepared to support the states and the governors dependent upon the impacts of the storm,” Fugate told reporters.

Much of Florida’s northeast coast was under a tropical storm warning on Friday, and storm watches extended up the coast through North Carolina.

Winds and rains generated by Sandy were being felt across much of Florida, with schools closed and air travel snarled in many areas.

Sandy weakened to a Category 1 storm as it tore though sparsely populated low-lying southeastern islands in the Bahamas late on Thursday, knocking out power and blowing rooftops off some homes.

Some further weakening was forecast over the next two days, but the Miami-based National Hurricane Center said hurricane or tropical-force winds were still likely by the time Sandy hits the US coast.

The Cuban government said Sandy killed 11 people when it tore across the island on Thursday. The storm took at least 26 other lives in deeply impoverished Haiti and four people were killed in the Dominican Republic, Jamaica and the Bahamas.

The Cuban fatalities were unusual for the communist-ruled country that has long prided itself on protecting its people
from storms by ordering mass evacuations.

Many forecasters are warning that Sandy could be more destructive than last year’s Hurricane Irene, which caused billions of dollars in damage.

The full moon on Sunday could add to Sandy’s potential for destruction when it comes ashore in the US. The storm is also somewhat unique because of its integration with the “polar trough”.

“We went through this same sort of thing back about 20 years ago around Halloween in 1991 with the ‘Perfect Storm’,” Todd Kimberlain, National Hurricane Center forecaster, said of the storm featured in a book and movie of that name which combined several different systems to ravage the East Coast.

A forecast report on Friday from AccuWeather.com predicted “a catastrophic storm” for the Middle Atlantic and Northeast.

“It will not be a purely tropical system, with a core of powerful winds near the centre, but rather more like a Nor’Easter, with strong winds over a larger area,” the report said. 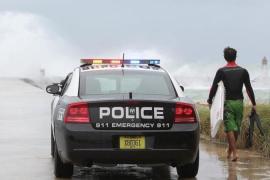 Category One storm leaves trail of death and destruction on Caribbean islands of Cuba, the Bahamas, Jamaica and Haiti. 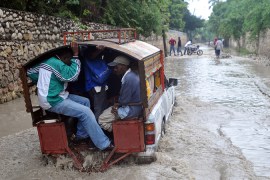 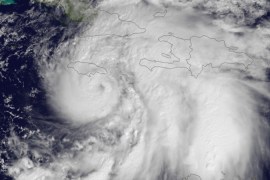 Storm gathers strength as 160kph winds hit country, a day after the hurricane battered the Caribbean island of Jamaica.