Silvio Berlusconi, the former Italian prime minister, has pulled an about-face, saying he feels compelled to stay in politics so that he can reform Italy’s justice system after being convicted of tax fraud.

Berlusconi’s reversal on Saturday of his decision to drop out from politics comes hours after he announced that he would appeal against his sentence by a Milan court for tax fraud connected to his Mediaset television channels.

He has called the the verdict “politically motivated”.

“I feel obliged to stay in the game to reform the justice system so that what happened to me doesn’t happen to others,” Berlusconi told TG5, his private Mediaset television.

Later on Saturday, in a press conference at his villa in Milan, Berlusconi went on to clarify that he would not stand as prime minster in next year’s general election. He went on to say that he wanted to pave the way for a new leader.

Berlusconi has wavered about his political future in the year since he was forced from office amid sex scandals, hamstrung by his inability to reassure financial markets that he could push through the economic reforms needed to ward off a Greek-style debt crisis.

The former prime minister was sentenced to four years in jail on Friday, but this was later cut to one year because of an amnesty law which reduces the sentences of all crimes committed up to May 2006.

In addition to the prison sentence, Berlusconi and 10 co-defendants were ordered to pay $13m to Italian tax authorities, a statement said.

The court also said Berlusconi, 76, could not hold public office for five years or manage any company for three years, penalties that would take force only if the conviction is upheld.

Berlusconi was accused of having artificially inflated the price of film distribution rights bought by shell companies, then selling these back to his Mediaset empire.

The tax scam helped to create secret overseas accounts that reduced profits in order to pay fewer taxes in Italy.

The prosecution had asked for a prison sentence of three years and eight months for Berlusconi.

Al Jazeera’s Claudio Lavanga, reporting from Rome, asked: “Does it mean he’ll go to prison immediately? Probably not, as there are two levels of appeal, but this conviction is certainly unexpected, and will have big consequences.

“His conviction will affect his political party, as well as the right.

“Furthermore, there has already been a strong reaction on the stock market as a result, showing that Berlusconi is paying the price economically at least.”

In a phone call to his Italia 1 private network, Berlusconi, who will remain free pending appeals, said: “It is a political conviction that I can define perfectly well as incredible and intolerable.”

Berlusconi denied that there was any connection between this case and his decision to step aside last year and allow another centre-right candidate to seek the premiership.

“My lawyers and I never thought that such a conviction would be possible,” he said.

Berlusconi was at “the top of the chain of command in the sector of television rights until 1998”, he said at the time.

De Pasquale had asked for a prison sentence of three years and four months for Fedele Confalonieri, Mediaset’s president.

However, Confalonieri, who was a close Berlusconi aide in his business dealings, was acquitted on Friday. 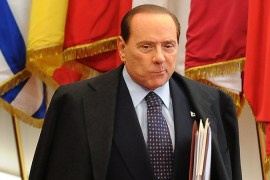 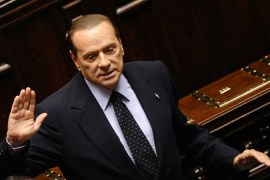 Italy’s former PM Silvio Berlusconi, who quit amid a string of scandals, gives hints he could stand in next elections. 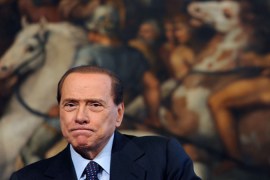 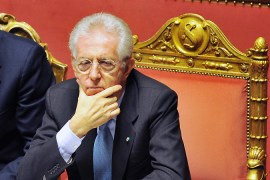 Does Italy want Berlusconi back?