President Barack Obama has fired up his campaign’s efforts to get supporters to the polls by casting an early ballot in his hometown of Chicago.

“For all of you who have not yet early voted, I just want everybody to see what an incredibly efficient process this was,” Obama said on Thursday.

Several American states allow voting before election day and polling data suggests the Democratic incumbent has built a lead over Republican challenger Mitt Romney among early voters in the run-up to November 6.

The race is otherwise extremely tight nationwide, and early voting just might make the difference in some areas.

“It means you don’t have to figure out whether you need to take time off work, figure out how to pick up the kids and still cast your ballot,” Obama told a small crowd of poll workers and observers, in televised footage.

“If something happens on election day, you will have already taken care of it. If it’s bad weather, you won’t get wet. Or in Chicago, snowy.” He then joked, “I can’t tell you who I voted for.”

Obama seemed cheerful and relaxed, despite being mid-way through a two-day, six-state, non-stop tour of battleground polling areas.

Early voting is a major component of Obama’s mobilization strategy, and is useful for ensuring that supporters who may have trouble getting to a polling station next month end up casting their ballots.

It also allows the campaign to concentrate their efforts on people who need more persuasion.

Obama is the first president to cast an in-person early ballot and his rare visit home thrilled many in this predominantly African-American neighbourhood.

Crowds began gathering outside the Martin Luther King Community Center hours before Obama was expected to arrive, attracted by the security barriers and news crews.

They chanted “four more years” as his motorcade zipped by, buffetted by strong winds from an oncoming storm that dumped sheets of rain on the crowd moments after Obama passed them.

“It was amazing,” Kelly Campbell, 41, said of her brief glance of Obama.

“I’ve seen him from behind, but to see his face…” she said as she held her 3-year-old daughter, Natalie, in one hand and her camera in another.

“I think he’s the greatest president ever,” gushed Chatae Black, 26, a waitress who was excited to be casting an early ballot in the same polling station as the president.

Beverly Green, 50, thought of her father as she stood in line vote next to a portrait of Martin Luther King Jr a couple of hours before Obama arrived.

Her father died shortly before the 2008 election and was unable to see his dream of an African-American president realised. She thinks Obama’s second term will be more meaningful than his first.

“He was on clean-up last time,” Green said. “This time it’ll be his own work. I think we’ll see things turn around.”

Angela Rand, 32, brought a picture of Obama to the community center in hopes he might sign it. She’s unemployed but doesn’t blame the president for the sluggish economy.

“It’s not his fault,” she said as she walked up to cast her early ballot. “I think he’s done a good job with the job he was handed.”

Eletha Shearer, 50, brought her son to vote early on Thursday to avoid the crowds on election day.

Shearer is confident Obama can win because she cannot understand why people would vote for Republicans who plan to slash benefits to the elderly.

“They must not think they’re going to get old, or they’ve got enough money it doesn’t matter to them,” the stay-at-home mom said. 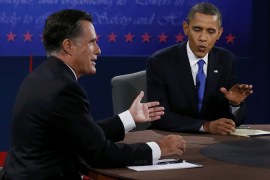 Romney agrees with many, if not all, of the major foreign policy initiatives that Obama has put forward, writes Sharma. 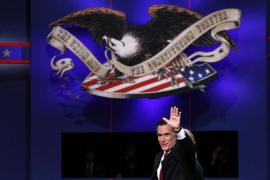 A missed opportunity for Mitt Romney

If the third debate freezes the campaign at this date, Obama might just have won the US election. 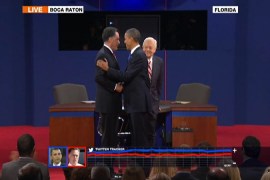 Obama and Romney face off in final debate

US presidential candidates debate foreign policy in their last encounter, with Libya and Iran high on the agenda. 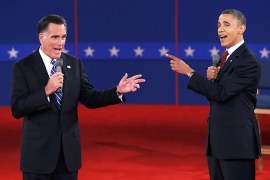 Obama and Romney faulted for China-bashing