Sudan has accused Israel of bombing a military arms factory, threatening retaliation after a resulting fire killed two people and injured a third.

Referring to the attack which occurred at about midnight local time (21:00 GMT) on Tuesday at the Yarmouk military manufacturing facility in south Khartoum, Ahmed Bilal Osman, culture and information minister, said: “We think Israel did the bombing.”

In his comments on Wednesday, he said: “We reserve the right to react at a place and time we choose.” Osman said four “radar-evading” aircraft were involved in the attack. It took troops several hours to contain the blaze.

On Thursday, a top Israeli defence official labeled Sudan a “dangerous terrorist state”, following the accusations that his country was responsible for the attack.

“Sudan is a dangerous terrorist state. To know exactly what happened, it will take some time to understand,” Amos Gilad told Israel’s army radio.

Asked directly whether Israel was involved in the attack, Gilad, who serves as director of policy and political-military affairs at the defence ministry, refused to reply directly.

“The people have seen it with their eyes – four planes coming from the east, and we have no enemy other than Israel,” Osman said.

“The type of rockets which we have now – and some of them did not explode – we have the codes, we have seen the planes directly, this is recorded.”

Sudan took its case to the UN Security Council on Wednesday, with Daffa-Alla Elhag Ali Osman, Sudanese ambassador to the UN, calling on the world body to condemn Israel.

“We reject such aggression and expect your esteemed council to condemn this attack because it is a blatant violation of the concept of peace and security” and the UN charter, he said.

He also accused Israel of arming rebels and helping to transport rebel leaders in Sudan’s Darfur region, where the UN says at least 300,000 people have been killed over the past decade.

Israel was “jeopardising peace and security in the entire region”, he said.

As Sudan’s cabinet met in an emergency session, about 300 protesters gathered nearby, denouncing Israel.

“The army of Muhammad is returning,” they reportedly chanted.

Osman, the information minister, told Al Jazeera that Israeli officials believed Sudan to be a threat, and was helping to arm opposition rebels.

“They think that this factory supplies our army, and by attacking it, they are going to make it easier for the rebels to take over,” he said.

“Plus, they have accused us, [saying] that these arms would find their way to Hamas. These are allegations which are not correct.”

He also promised retribution, though ruled out any direct attack on Israel.

“We have to reply,” Osman told Al Jazeera.

“This is too much. This is the fourth time they have done this. We have our right to attack the interests of Israel wherever – this is a legal target for us from now on … They killed our people. these lives are not cheap – and we know how to retaliate.”

Al Jazeera’s Harriet Martin, reporting from Khartoum, said that although no evidence linking Israel to the fire had been made public, concurrent reports suggest there may be some truth in the accusations.

“There have been numerous reports from eyewitnesses, saying what initially many people thought was a plane passed over, and then there was a big, white explosion,” she said.

“These reports have come from many different sources […] and so it does seems something happened before this munitions factory caught on fire.”

Fires flaring across a wide area, with heavy smoke and intermittent flashes of white light bursting above the state-owned factory, were seen from several kilometres away.

“I heard a sound like a plane in the sky, but I didn’t see any light from a plane. Then I heard two explosions, and fire erupted in the compound,” a resident who asked to be identified only as Faize told the AFP news agency.

The Yarmouk facility is surrounded by barbed wire and set back about 2km from the district’s main road, but at least three houses in the neighbourhood had been punctured by shrapnel which left walls and a fence with holes about 20cm in diameter, AFP news agency said.

There was also slight damage to a Coca-Cola warehouse.

“The attack destroyed part of the compound infrastructure, killed two people inside and injured another who is in serious condition,” he said.

The military and foreign ministry in Israel, which has long accused Khartoum of serving as a base for armed members of the Palestinian group Hamas, told Al Jazeera they had “no comment” regarding the accusation.

Sudan has a long and difficult relationship with Israel. During two decades of civil war, Israel allied itself with the Sudan People’s Liberation Army, which had taken up arms against the government.

In 2009, a convoy carrying weapons in northeastern Sudan was targeted from the air, killing dozens of people.

It was widely believed that Israel carried out the attack on what was supected to be a weapons shipment heading for Palestinian armed groups in the Gaza Strip.

Israel never confirmed or denied that attack. Sudanese parliamentarians denied at the time that weapons were transported in the area.

In 1998, Human Rights Watch said a coalition of opposition groups alleged that Sudan stored chemical weapons for Iraq at the Yarmouk facility but government officials denied the charges.

In August of that year, US cruise missiles struck the Al-Shifa pharmaceutical factory in north Khartoum, which Washington alleged was linked to chemical weapons production. 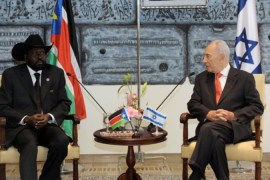 South Sudan’s President Salva Kiir sets off on an official visit to Israel. 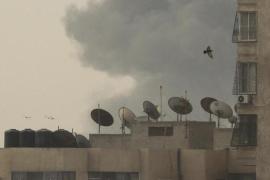 Israel and Gazans in tit-for-tat attacks 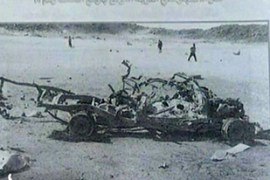