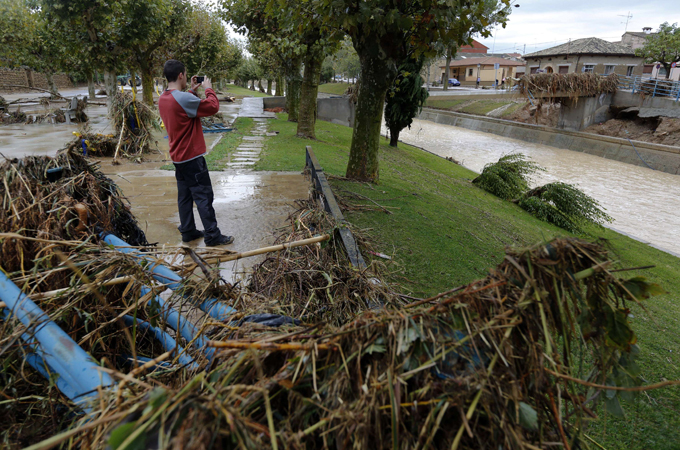 Two bridges collapsed and roads were closed when heavy rain and flooding hit Sadaba, near Zaragoza, in Spain [AFP]

After the driest winter in 70 years and the worst forest fires in a decade, the last few days have seen stormy weather rolling across the Iberian Peninsula. Spain and Portugal have been hit by strong winds and flooding rains over the last few days and there has been some loss of life.

The heavy rain set in after an Atlantic storm system came arrived from the west. It quickly ran into a large area of high pressure which had developed over central Europe, dragging warm moist air in from the Mediterranean. The resulting converging winds forced the air to rise rapidly resulting in the violent downpours.

The worst of the flooding hit the northeastern Catalonia region of Spain. Here, emergency management teams working in Gerona province, found the body of a woman in the sea after she was swept away by a huge wave on the beach at Lloret del Mar.

Authorities are also looking for two other people who have since been reported missing. Citizens were urged to take extreme precautions all along the coast where waves as high as 2.5 metres battered the shores.

The region of Aragon experienced heavy rain, causing flooding and widespread damage in the province of Zaragoza. The torrential downpours raised the water level of a river until it flooded houses and stores and damaged cars parked along the roadways.

Meanwhile, Villadolid, located on the Spanish Plain to the north of Madrid recorded 44mm of rain in 24 hours on Thursday. Further north, Santander had 67mm in the same period Thursday evening going into Friday.

The worst of the rain is now moving into the western Mediterranean Sea, but there will still be further sharp showers affecting eastern Spain over the next couple of days. Any respite thereafter is likely to be short-lived. More heavy rain is expected to move across Spain and Portugal by the middle of next week.