Dozens of Japanese parliament members, including two cabinet ministers, have visited a controversial war shrine amid heightening tensions between Japan and its neighbours over territorial disputes.

Chinese media criticised the head of Japan’s top opposition party for also going, calling his visit on Thursday a provocation.

The politicians were attending an autumn festival. Prime Minister Yoshihiko Noda did not join them, but opposition leader Shinzo Abe, seen as the front-runner to succeed Noda, paid his respects there the day before.

The Yasukuni Shrine in Tokyo is controversial because, along with honouring two and a half million war dead, it honours 14 Japanese wartime leaders convicted of war crimes. It remains a focus of nationalist pride among Japanese conservatives and right-wingers.

China’s Xinhua news agency criticised Abe’s visit, saying in an editorial Wednesday that it was “the latest of a flurry of Japan’s provocative moves against China, and would further poison bilateral ties”.

Abe is a former prime minister who is well right of center and considered a hawk on China. But his party is believed to be in good position to defeat Noda’s in upcoming elections, which could bring him back to the national helm.

Previous visits to the shrine by political leaders have been harshly criticised by China and North and South Korea, which bore the brunt of Japan’s pre-1945 militarist march through Asia. The visits are regarded as evidence that Japan’s leaders do not acknowledge their country’s responsibility for its colonialist past.

“The Yasukuni Shrine issue is about whether Japan correctly acknowledges its history of invasion and of Japanese militarism, and about the feelings of the people in victims’ countries, including China,” China’s state broadcaster CCTV quoted Foreign Ministry spokesman Hong Lei as saying.

Japan’s chief cabinet spokesman said the two ministers attended the festival in a private capacity, and played down its significance.

But the visits come as Japan is increasingly at odds with China over a group of small islands in the East China Sea that both countries claim, and with South Korea over another disputed island that has been controlled by Seoul since the 1950s.

Anger over a decision last month by Japan to nationalise the disputed islands, called the Senkaku in Japan and the Diaoyu in China, led to mass demonstrations across China and has soured diplomatic and economic relations between the two. 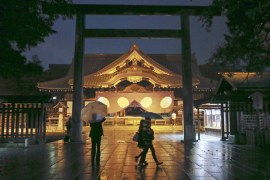 Critics say the Yasukuni Shrine symbolises Japan’s failure to atone for its past militarism and war crimes. 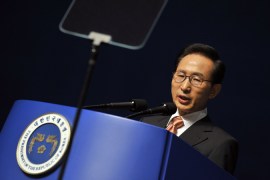 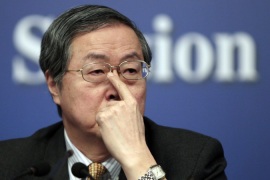 Cancellations by bank governor and finance minister come as two nations remain at odds over islands in East China Sea.