Opposition populists and leftists in crisis-worn Lithuania have hinted they are prepared to form a government coalition after an exit poll late on Sunday indicated their parties would take first and second place in the country’s parliamentary elections.

The exit poll conducted by RAIT/BNS gave the biggest share of the vote, 19.8 per cent, to the Labour Party.

And Labour’s most likely coalition partner, the centre-left Social Democrats, were second with 17.8 per cent with the prime minister’s Homeland Union in third place on 16.7 per cent.

The ex-Soviet state, with a population of nealy three million, drastically suffered when the crisis hit four years ago. It was swift to slash spending in response and is now on course to return to economic health – but the belt-tightening failed to win over dispirited voters.

Lithuanian voters threw out centre-right Prime Minister Andrius Kubilius, in favour of a coalition of left-leaning opposition parties who promise to alleviate austerity measures, according to the exit poll following Sunday’s parliamentary election.

The Baltic nations government failed to maintain its seats despite being applauded by big European powers and the International Monetary Fund (IMF) for its disciplined financial planning.

Kestutis Girnius, from the Institute for International Relations and Political Science in Vilnius said: “If the IMF was voting then he (the prime minister) would be re-elected,” adding, “But the IMF does not live in Lithuania, and they could not live on a Lithuanian salary.”

The country was one of the most severely hit European Union states by the financial crisis, and one of the quickest to react by instantly implementing austerity.

It is a bellwether for the governments of Greece, Spain, Ireland and elsewhere, who are being forced to make similar stinging cuts. 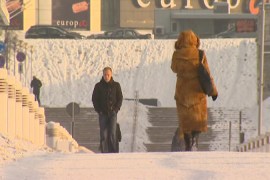 One sixth of the population has left in two decades as the country tries to claw out of recession.