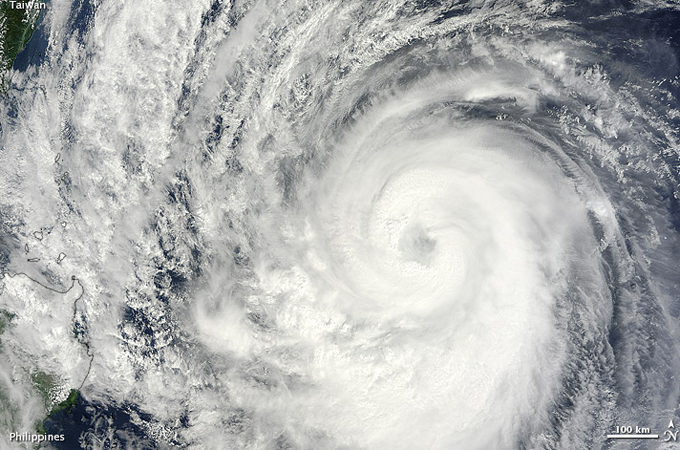 Typhoon Prapiroon rages in the northwest Pacific, while the first storm of the Indian Ocean season forms east of Madagascar [NASA]

We have no less than six tropical storms swirling away at the moment. Thankfully, only one currently poses a threat to land.

The Atlantic and Caribbean hurricane season runs from June 1 to November 30 and this is where we have our most significant storm at the moment in terms of the impact that it will have on land.

Tropical Storm Rafael is located to the north of the Virgin Islands. It has sustained winds of 85 kph, is moving north at around 22 kph and is expected to become a hurricane on Monday.

Damaging winds and flooding rains are likely across much of the northern Leeward Islands and the Virgin Islands. The storm is expected to produce as much as 125mm of rain across the region and some spots could see 250mm of rainfall which could cause life-threatening flash floods and mudslides, especially across mountainous areas.

Further north, Tropical Depression Patty has just dissipated to the east of the Bahamas having brought some very heavy rain. There will still be some very heavy downpours here, but the system is not likely to cause any further problems.

On the other side of North America we have the newly formed Tropical Storm Paul with winds of 85kph. This system has begun to strengthen in the eastern Pacific, well southwest of Mexico’s Baja California peninsula. It is expected to become a hurricane later on Sunday, but will stay well out in the open waters.

On the other side of the Pacific, Typhoon Prapiroon lies well to the east of the Ryukyu Islands. Again the eye of the storm is expected to stay well away from land, but the outer-bands could bring some heavy rain into the southern half of Japan by the end of the week.

Before that happens, Tropical Depression 23 is currently swinging in just to the north of Guam. It should then overtake Prapiroon and also pass to the east of Japan around the middle of this week.

Finally, moving into the southern hemisphere, we have an early developer. The season here normally runs from November to April, but Tropical Cyclone Anais has just cropped up to the southwest of Diego Garcia in the middle of the Indian Ocean.

It is making its way towards Madagascar and it’ll take about a week to get there, but will lose strength as it does so. Heavy rain is likely, but the winds should not be a problem.