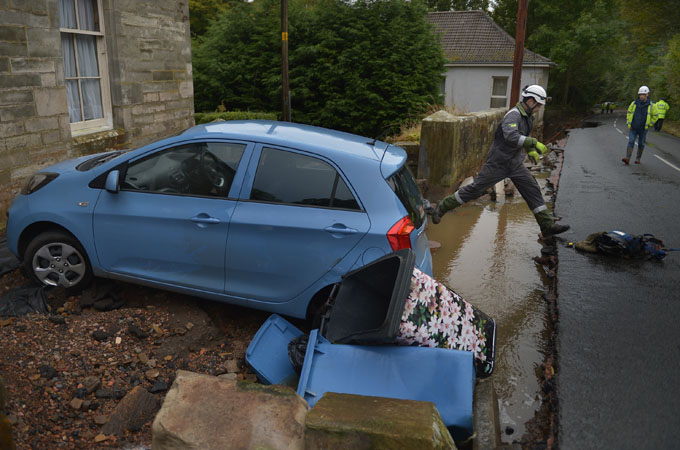 After the deluge – a vehicle is damaged by debris and flood water. [Getty Images]

On Friday much of eastern Scotland was hit by torrential rain resulting in widespread flooding.

The worst affected area was Fife, where raging torrents of water damaged houses and disrupted travel.

Both the A92 near Monifieth and the A937 at Marykirk were closed and dozens of minor roads were also affected.

In Dura Den, near Cupar, five people were trapped in their homes after a river burst its banks, washing away part of the road and tearing the side off a house.

The sound of rushing water past her house was described by one resident as “like Niagara Falls”.

Forecasters estimated that as much as 80mm of rain fell in some parts of the country during Thursday night and through much of Friday – the equivalent of half a month’s rain.

The Scottish Environment Protection Agency had as many as 34 flood warnings in force, covering some two thirds of the country.

The weather is expected to remain very unsettled across Scotland in the coming days although there are no indications of rainfall on the same scale.