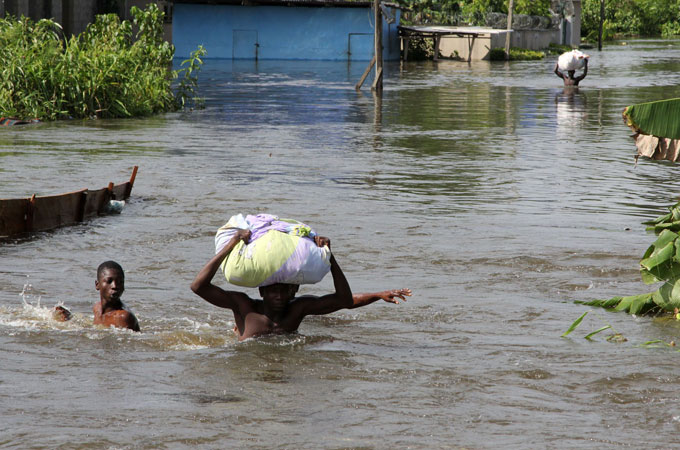 ‘A national disaster’ is how Nigeria’s president, Goodluck Jonathan, has described the floods that have hit his country over the last few months.

Exceptional rainfall has caused chaos across Africa’s most populous nation and the Niger river, the third longest in the continent, has burst its banks.

The torrential monsoon rain is estimated to have killed at least 140 people across the country and, in the northern state of Kogi alone, more than 623,000 people have been displaced.

Thousands of square kilometres of farmland have been flooded raising concerns about food security. Output of cocoa, a major cash crop is also expected to be badly affected.

Heavy seasonal rain is a feature of Nigeria’s climate as the monsoon trough migrates northwards and then southwards across the country. For northern regions, June to September is the sole rainy season whilst in the south there are two such seasons: March to July and again from September to October.

Flooding problems began in early July when Lagos experienced severe disruption. Ibadan, just north of Lagos, was badly affected by flood waters in mid-July. At the end of the month 39 people were killed in the central Northern Plateau state and the same region saw another 33 fatalities in mid-August after more torrential rain washed away homes and destroyed roads and bridges.

The heaviest rains in almost three decades have obviously been mainly responsible for Nigeria’s problems, but the rapidly expanding urban population has also led to problems of drainage.

Touring a makeshift displacement camp, Goodluck Jonathan told refugees, “We are thinking of how to settle you all back to your places after the floods. Government is doing everything possible to cushion the effects on you … it will soon be over.”

Although most people are keen to return to their homes, they are wary of what they may find after reports of snakes, crocodiles and even hippopotamuses being found in houses.

The government has pledged millions of dollars in aid but with the rainy season continuing around the Niger Delta for at least another week, it will be some time before the country can get back to normal.