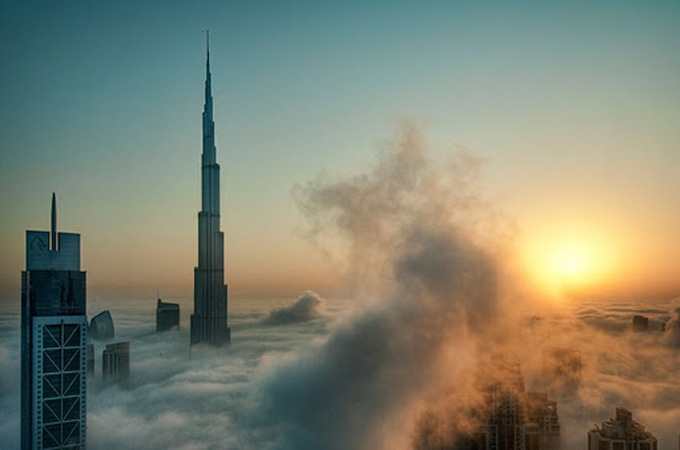 For the third day in a row, the United Arab Emirates has been dealing with thick fog across much of the country.

While a very beautiful sight when viewed from the top of the Burj Khalifa, on the ground it has been making the morning commute very treacherous.

Driving in Abu Dhabi, Dubai and Sharjah can be a nightmare. But when you add fog on top of that, reducing visibility down to 150 metres or less, you’re only adding fuel to the fire.

On Wednesday as many as 141 accidents occurred in the early morning hours. Some onlookers reported seeing drivers who were obviously unaccustomed to such a phenomenon travelling much to fast. Visibilities on the road can drop down to zero within seconds.

Brigadier Omar Abdul Aziz Al Shamsi, director of the command and control centre in the police operations room, appealed to all motorists to be extremely cautious in reduced visibility and keep sufficient distance between vehicles.

Al Shamsi also stressed to use all the appropriate lights during the early morning drive, but avoid using hazard lights as this will not allow the driver to indicate intentions to change lanes.

Dubai International airport also closed both of its runways in the early hours following a power failure during the foggy conditions. Airport authorities confirmed that 50 flights needed to be diverted to other locations.

Fog at this time of year across the Emirates is not uncommon. Overnight temperatures across the region are now dipping down to the mid 20’s. When warm moist air from over the Gulf waters moves inland, the moisture condenses and fog forms. Normally by late morning, the sun will have warmed the air sufficiently to totally evaporate the fog.

Conditions are still in place in which drivers could see a few more mornings of foggy and slow commutes across the UAE.