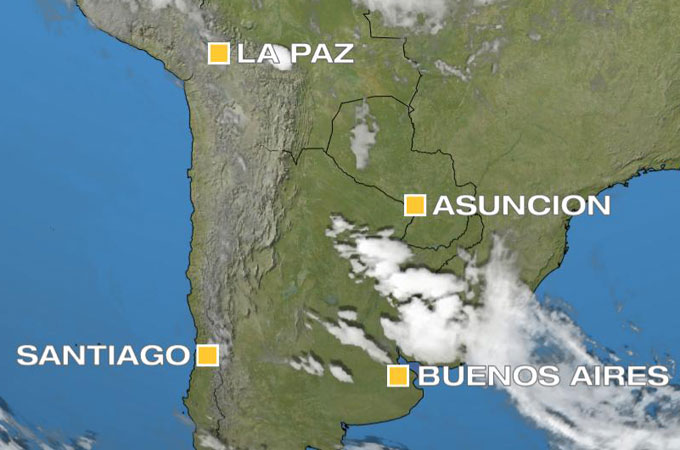 The rains began on Saturday, and remained heavy for the next three days. Large parts of Uruguay are now underwater [Al Jazeera]

Days of relentless rain have submerged parts of South America.

Three people are now known to have lost their lives in the downpours, and over 2,000 more have been evacuated.

The rains started on Saturday and have remained over the same area for several days, leading to widespread flooding.

In Argentina the rain has been heaviest over the province of Entre Rios, which borders Uruguay. Dozens of families have had to be evacuated.

In Uruguay the situation is more severe. As much as 334mm of rain was reported in Paso del Cerro in Tacuarembo, which is approximately three times the amount of rain which is normally seen in the entire month.

Nearly two thousand people in Uruguay have had to be evacuated in the departments of Artigas, Rivera, Salto, Tacuarembó and Paysandú.

The warning of severe weather has now been lifted by Uruguay’s Meteorological Office, indicating that the worst is over.
The flooding has come at a bad time for Argentina’s wheat crops which have already been sown. Farmers are currently assessing damage caused by the floods. However, there is optimism for other crops.

This is the time of year that corn and soy are planted, and farmers are hoping that the wet start to the spring planting season will ensure a bumper crop.

Argentina is one of the largest exporters of corn and soy products, but the 2011/2012 harvest was badly affected by drought. Farmers are encouraged by the forecast of generous, but not excessive rainfall in the northeast of the country over the next five days.

A plentiful harvest would be good news not only in Argentina. Many of the top producers were hit by drought this year, including the USA, Russia and Australia. A bumper crop in Argentina may go some way to halting the spiralling cost of food throughout the globe.