The Nigerian army has denied its soldiers killed 35 people in the northern city of Maiduguri on Monday.

Witnesses said troops opened fire after a bomb blast struck a military convoy and that soldiers whipped residents before going on a shooting spree, and nurses in the Umaru Shehu hospital said 30 of the dead were in civilian clothes, while another five wore military uniforms.

“There was no incident involving the killing of 30 civilians,” Lieutenant Colonel Sagir Musa, spokesman for a military joint task force in Borno state, where Maiduguri is the capital, said in a statement on Tuesday.

“Also, there was no arson and harassment by the JTF [Joint Task Force] troops in Borno state.”

Nigerian soldiers have regularly faced accusations of killing civilians and burning homes or shops following bomb attacks targeting troops. Soldiers have in the past accused residents of co-operating with the attackers.

Al Jazeera’s Yvonne Ndege, reporting from the capital, Abuja, said the statement also disputed the number of those killed.

The statement contradicts a report by the Associated Press news agency, which said on Monday that one of its reporters saw at least 30 bodies belonging to civilians.

The AP reporter also said he saw about 50 homes as well as businesses burnt by soldiers. The premises are near the Nigerian Union of Journalists state office and other buildings in Maiduguri.

Rounds shot from the heavy machine guns destroyed cars and set roofs on fire, which razed buildings and caused damage at a two-story shopping complex.

The AP journalist accompanied Zanna Umar Mustapha, the deputy governor of Borno state, on the tour.

State officials declined to comment on the killings and urged those travelling with the convoy not to take photographs of the destruction out of fear of further alienating those living in the region.

Nigeria’s military has been accused of committing so-called “extra-judicial killings” while in pursuit of the armed group Boko Haram, which ahs killed hundreds of people this year.

The military also downplays its own casualties suffered during the operations.

Boko Haram has often targeted places of worship and killed both Christians and Muslims in their attacks, as well as soldiers and security forces. 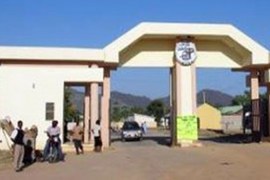 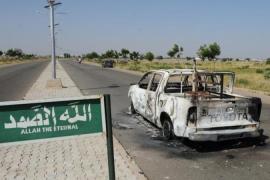 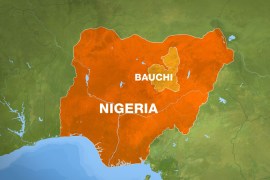 Attacker kills woman and child and injures at least 22 people in blast outside Catholic church in the city of Bauchi.