An appeals court in Russia has freed one of the jailed members of punk band Pussy Riot while upholding the sentences handed down to the two remaining members in prison.

The court judge said on Wednesday that he would suspend the sentence for 30-year-old Yekaterina Samutsevich, while leaving the two-year jail sentences for Nadezhda Tolokonnikova, 22, and Maria Alyokhina, 24, unchanged.

In August the three band members were jailed for two years on grounds of hooliganism motivated by religious hatred after performing a “punk prayer” in Moscow’s main Orthodox cathedral imploring the Virgin Mary to rid Russia of Vladimir Putin, the president.

The appeals court judge ruled that Samutsevich’s sentence should be suspended since she had been thrown out of the cathedral by guards before she could participate in the performance.

The three women had maintained that their performance was a political protest and that they did not have anything against the Orthodox contingent of Russia.

While the reaction to the protest within Russia was met with shock by many, the controversial case sparked a global outcry with Western governments condemning the sentencing.

Madonna lent support during one of her own concerts condemning the decision as disproportionate.

Describing the scenes outside the courtroom, Al Jazeera’s Robin Forestier-Walker said: “There have been cheers regarding Yekaterina’s freedom and obviously disappointment as well for the two girls who will serve out their two-year sentences.

He added that there were also Orthodox Christians outside the court saying that the women were influenced by “the Devil”.

“As they would put it, this court was effectively recognised as the hand of god and effectively this is a decision that should stand,” he said.

Earlier this week, Putin said in an interview to mark his 60th birthday that the band members had got what they deserved.

After Putin’s comments, relatives and lawyers for the punk band complained that political interference would mar and ruin their chances of a fair hearing adding that Putin’s comments on the case had compromised the appeal.

Samutsevich’s father, Stanislav, told the Reuters news agency on Tuesday: “After Putin’s comments, I don’t think lawyers can do anything anyway,”

Their protest was intended as an acerbic comment on the close ties between the Kremlin and Russia’s dominant church.

Church leader Patriarch Kirill had given Putin, then prime minister, unofficial but clear support in his successful campaign for a third presidential term earlier this year.

Opposition to the Kremlin said the jail terms were part of a clampdown on dissent that has produced restrictive laws and criminal cases against critics of Putin since he began his latest six-year term in May. 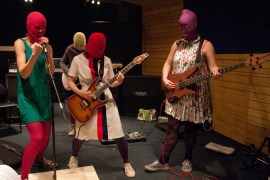 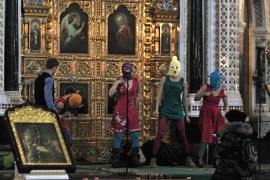 Court should decide on fate of punk band but they should not be judged too harshly, Russian president says. 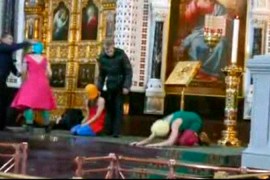 Women flee country to avoid prosecution for staging protest against President Putin at a cathedral altar.