Turkey’s military has struck back at Syrian military positions after a shell fired by the neighbouring country landed in a Turkish border area, reports say.

Turkey retaliated in kind after the Syrian shell landed in Altinozu district, in southeastern Hatay province, at around 12:00 GMT on Monday, a Turkish official told AFP news agency on condition of anonymity.

Earlier, Celalettin Lekesiz, Hatay’s governor, said a total of six Syrian shells had hit the province so far, without any casualties.

It was not immediately clear if the governor’s figures included Monday’s shelling – the sixth consecutive day of Turkish retaliation.

Abdullah Gul, Turkish president, gave warning again on Monday against a spillover of the Syrian conflict into Turkey.

“Our government is in constant touch with our general staff in this process,” Gul was quoted as saying by Anatolia, the state news agency.

“Whatever is necessary is being done as you already see, and will continue to be done.”

For his part, Ban Ki-moon, UN secretary-general, has raised concerns about arms supplies to both President Bashar al-Assad’s government and rebel forces.

“I am deeply concerned by the continued flow of arms to both the Syrian government and opposition forces. I urge again those countries providing arms to stop doing so,” he said at the opening of the World Forum for Democracy in Strasbourg, France, on Monday.

He also spoke  of a “dangerous” fallout from escalating violence along the Syrian-Turkish border.

“The escalation of the conflict along the Syrian-Turkish border and the impact of the crisis on Lebanon are extremely dangerous,” Ban said.

Turkey’s parliament has given the government the green light to use military force against Syria if necessary, while the UN Security Council has called for restraint between the neighbours.

Shells which killed five civilians on Wednesday at Akcakale, in Sanliurfa province, prompted Turkish retaliatory fire which has been repeated with every new Syrian shell that lands across the border as Assad’s government battles rebel fighters.

Shelling from Syria into Lebanon and cross-border shootings, meanwhile, has become regular occurrences, while residents of Lebanon’s frontier region accuse Syria’s army of carrying out frequent incursions and kidnapping refugees.

“We have called for a no fly zone [and] humanitarian corridors to protect civilians,” Sieda told Al Jazeera in an exclusive interview from Idlib, Syria.

“We now have 3 million internally displaced people and half a million refugees in neighboring countries. These huge numbers require international protection.

“If they are not able to impose a no-fly zone then provide our fighters on the grounds with anti-aircraft weapons to preempt further airstrikes and destruction.” 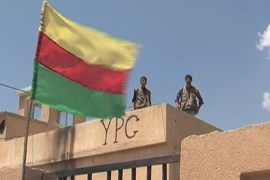 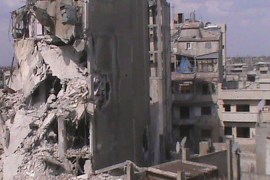 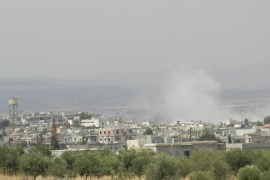