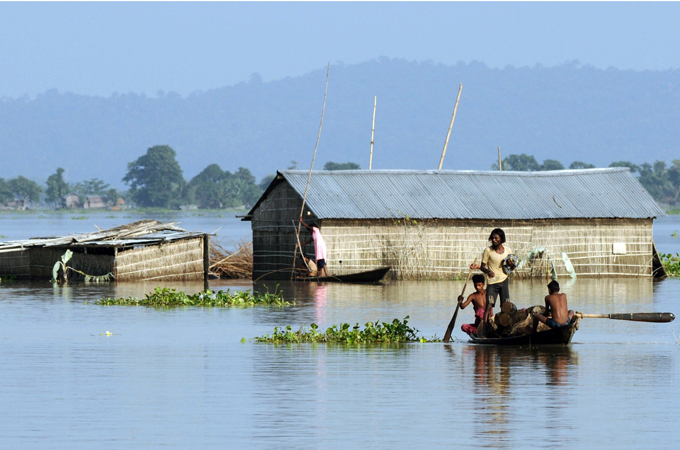 Indian villagers use a boat to travel through floodwaters surrounding the village of Pokoriya in Assam state. [AFP]

Monsoon rains continue to cause disruption across parts of south Asia. The heaviest downpours currently lie across central southern India but with the rains still very much in place across much of India and Bangladesh, any significant rain falling on the saturated grounds can cause problems.

Much of northeastern India continues to struggle to cope with widespread and devastating flooding as many of the swollen rivers have burst their banks. Further rain is now hampering military operations to help those affected across the region. More than two million people have been forced to leave their homes.

Meanwhile, on Sunday night, it was the turn of Nepal to have to deal with the torrential rains. In the process, a landslide swept several vehicles off a mountain highway.

Seven people are known to have died and at least 14 others are still reported missing after the landslide struck five vehicles travelling on the Mechi highway near Kilbung village in eastern Nepal.

The bodies were recovered about 100m below the hilly road on Monday morning. Eight people were since been rescued.

Ordinarily, we would expect the southwesterly monsoon rains to clear Bangladesh and northeastern India by around the 10th October. That is not likely to be the case this year with the monsoon withdrawal currently around 10 days behind schedule.