Yemen’s interim government has agreed to grant President Ali Abdullah Saleh, and anyone who has worked under him, amnesty against prosecution, paving the way for his departure in line with a Gulf plan to end deadly protests against his rule.

Sunday’s decision came as a surprise to many in Yemen, who believed that a power transfer deal he signed in November granted him and his family immunity from prosecution for the killings of protesters, but would not extend to cover his 33-year rule and anyone who worked in government.

The Cabinet approved the law despite nationwide daily protests demanding the long-time leader be put on trial for the killing of hundreds of people in raids on protest camps, the use of snipers and armed attacks on marches during the country’s 11-month popular uprising.

The wording of the law “provides Saleh, 69, and those who worked with him, including in civilian, military and security institutions during the period of his presidency, legal and judicial immunity.”

The agreement, brokered by Yemen’s powerful Arab neighbours and backed by the United States, the European Union and the United Nations, grants Saleh immunity in exchange for him handing over powers to his deputy.

In November, Saleh signed a Gulf-brokered deal aimed to end the political crisis in the impoverished country. Under the deal, he handed authority to Abdrabuh Mansur Hadi, the vice president, and the opposition formed a national unity government.

Saleh serves now as an honorary president until polls are held in February to elect Mansur as his successor.

According to the agreement, Yemen’s parliament must approve the law as a formality after the Cabinet vote. Saleh is scheduled to hand over the presidency to his vice president on February 21.

The decision to grant blanket immunity to Saleh and all those who worked for him comes on the same day that a security chief who oversaw deadly crackdowns on anti-government protesters was fired from his position, according to a local official.

The dismissal strikes a minor blow to Saleh, a savvy politician who some believe is trying to undermine the power transfer deal to retain power.

Opposition figures charge that he is still trying to run the country, though he signed the deal under heavy international pressure and after months of stalling.

The firing of the Taiz region’s security chief, a staunch Saleh ally, could indicate that his control, once absolute, is slipping.

Activists say that the country’s Revolutionary Guards, run by Saleh’s son, are responsible for most of the attacks on protesters.

A regional council member said the decision was based on Qairan’s role in the deaths of protesters.

“He was involved in killing civilians because he is the one who ordered the forces to fire on protesters and raid protest camps,” the official said, speaking on condition of anonymity because of the issue’s sensitivity.

Taiz has been a hotbed of anti-regime activity, and security forces have at times responded with deadly force.

Before the Gulf-brokered deal, Saleh could have easily overruled Qairan’s dismissal. 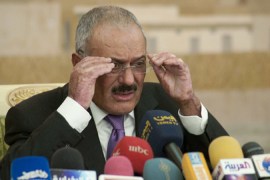 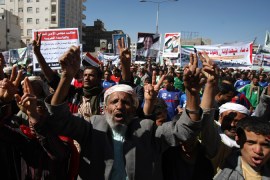