Tens of thousands of people are gathering in South Africa to celebrate the 100th anniversary of the African National Congress – the continent’s oldest liberation movement.

The party has been in power since 1994, when Nelson Mandela was elected the country’s first black president.

The ANC played a pivotal role in the struggle to end apartheid, and it still holds a strong majority of public support.

But with in-fighting, allegations of corruption, and criticism from many sectors, there are concerns that the current party leadership is failing to live up to the titans of old.

Tania Page reports from Bloemfontein, where the ANC centenary celebrations are being held. 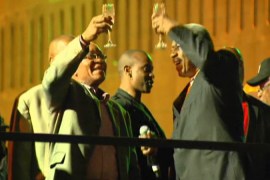 Celebrations to be held this weekend amid growing dissatisfaction with ruling party’s policies.