Gunmen have killed at least 20 people in fresh attacks in the northeastern Nigerian province of Adamawa in continuing sectarian violence, police and witnesses say.

Armed Islamist group Boko Haram has claimed responsibility for at least one of the attacks, and the government says it engaged the group’s fighters in a northeastern town in clashes that continued through Friday night.

At least eight people were killed when gunmen opened fire on worshippers in a church in Yola, the capital of the province, on Friday, a hospital source said.

“Bodies were brought in from the church attack,” a hospital source told the AFP news agency.

“There was an attack at the Christian Apostolic church this evening. Some gunmen went into the church and opened fire on worshippers killing some people and wounding several others,” a journalist who lives in Yola said on condition of anonymity.

Adamawa saw another attack earlier in the day, when at least another 12 were killed after armed men opened fire at a town hall in Mubi, near Nigeria’s border with Cameroon.

That attack targeted members of the Christian Igbo community, and witnesses said that the attackers were chanting “God is great” as they carried out their assault.

“We started hearing many gunshots through the windows,” said Okey Raymond, 48, who attended the meeting in Mubi. “Everyone scampered for safety, but the gunmen chanted: ‘God is great, God is great’ while shooting at us.”

Ade Shinaba, the local police commissioner, said the attackers also carried knives and machetes. No arrests have been made in that attack, in which at least 15 other people were wounded.

The government put into effect a 24-hour curfew in Adamawa state on Saturday afternoon.

Residents have been ordered to stay indoors, and military personnel are deployed on the streets to enforce the curfew.

Meanwhile, in Yobe state, a confrontation between Boko Haram gunmen and police caused hundreds of residents to flee their homes on Friday evening, police and residents said.

“Our men engaged Boko Haram gunmen in shootouts for most of the night which led to some deaths and injuries,” Yobe state police commissioner Lawan Tanko told AFP of the clashes in the town of Potiskum.

“It is too early to give figures because we are still investigating the incident and taking stock of the situation,” he said.

Dozens of gunmen stormed Potiskum on Friday, launching gun and bomb attacks on the police headquarters.

The death toll in those clashes was at least three, according to preliminary police figures.

On Thursday evening, gunmen stormed a church in the northeastern city of Gombe and opened fire as worshippers were praying, killing at least nine people, according to state television.

The attacks come as a three-day ultimatum has been issued by a purported spokesman for extremist group Boko Haram, for Christians to leave the mostly Muslim north of the country.

A day before the ultimatum was issued, President Goodluck Jonathan declared a state of emergency in parts of four states hit hard by violence blamed on Boko Haram, particulary Christmas bombings that killed at least 40 people.

Nigeria’s weak central government has been slow to respond to Boko Haram. On December 31, Jonathan declared regions of Borno, Niger, Plateau and Yobe states to be under a state of emergency – meaning authorities can make arrests without proof and conduct searches without warrants.

He also ordered international borders near Borno and Yobe state to be closed.

However, the areas where the recent church and town hall attacks happened are not in the areas marked by Jonathan.

Boko Haram is accused by the government of killing at least 510 people last year alone, according to an AP news agency count. 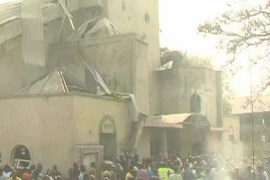 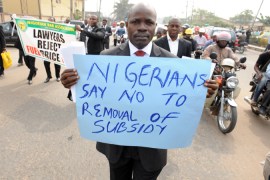 Trade unions have threatened to begin an indefinite general strike from Monday, as protests continue. 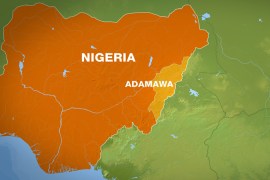