Christian Wulff, the German president, has admitted in a television interview that he made a “grave mistake” by trying to prevent a newspaper from publishing an embarrassing story, but said had no plans to resign.

Wulff broke his silence on Wednesday about a report that emerged earlier this week that he had left a voicemail message last month for the editor of top-selling German daily Bild in which he threatened “war” if the paper published an article on his low interest-rate home loan.

The scandal risks becoming a major distraction for Chancellor Angela Merkel, who nominated him for the ceremonial but influential post in 2010.

With pressure growing for him to step down, he arranged an interview with German public television stations ARD and ZDF on Wednesday to try to calm the storm.

“The call to the chief editor of Bild was a grave mistake, for which I am sorry and for which I apologise,” Wulff said, admitting that had not done everything right but had broken no laws.

Asked whether he had considered resigning in the past few days, Wulff said: “No, because I had great support in the past weeks from many citizens, my friends and employees.”

He continued: “I like fulfilling my duties [as president] and have taken the job for five years and want to show at the end of the five years that I was a good, successful president.”

It was unclear whether the apology would be enough to ease the pressure on Wulff, a former state premier from Lower Saxony and senior figure in Merkel’s Christian Democrats, to step aside

In the interview, he tried on several occasions to portray himself as a victim of the scandal, an approach which could backfire.

“This has been a learning process,” Wulff said. “I went from being a state premier to president very quickly, without time to adjust or prepare. It all went very fast.” 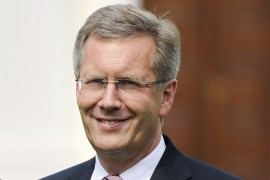 President facing demands for explanation on his attempt to suppress a newspaper story about loans from wealthy friends.