The Arab League has called for an emergency meeting to discuss a preliminary report from monitors in Syria following allegations that security forces are still killing anti-government protesters despite the observers’ presence.

Ahmed bin Heli, the Arab League deputy secretary-general, said on Tuesday that the meeting would take place on Saturday in the Egyptian capital, Cairo.

The meeting will bring together Nabil El-Araby, the Arab League secretary-general, and the foreign ministers of Egypt, Sudan, Algeria, Qatar and Oman, sources inside the organisation said.

There are about 100 Arab League monitors in Syria, dispatched to verify the government’s compliance with a plan to stop its crackdown on dissent.

On Monday, El-Araby told a press conference that killings were continuing but that Syria’s military had withdrawn tanks and artillery from residential areas and was on the outskirts of the country’s cities.

“Yes, there is still shooting and, yes, there are still snipers,” El-Araby announced in Cairo, where the Arab League is based.

“Yes, killings continue. The objective is for us to wake up in the morning and hear that no one is killed. The mission’s philosophy is to protect civilians, so if one is killed, then our mission is incomplete.”

“There must be a complete ceasefire.”

Syrian opposition activists have, however, rejected claims that the military had withdrawn from the cities, posting online videos on Tuesday of military vehicles in the flashpoint city of Homs.

“This is the answer to Nabil El-Araby,”  an activist said in the video. “From the morning, [government forces] were still shooting at residents.”

Many Syrian opposition activists are sceptical that the observers’ mission can put real pressure on President Bashar al-Assad to halt the violence.

They say at least 150 people have been killed since the observers began their mission on December 26. The Local Co-ordination Committees network said six people were killed across the country on Tuesday, four of them in Homs.

Syria’s state-run SANA news agency on Tuesday blamed “terrorists” for a blast that hit a gas pipeline in the town al-Rastan, also located in the province of Homs.

But activists claimed security forces had blown up the pipeline to distract the attention of the observers team away from the suffering of local residents.

Meanwhile, France’s President Nicolas Sarkozy demanded that Assad step down, accusing him of overseeing sickening “massacres” against his own people.

Sarkozy told an audience of French military personnel that the Syrian people should be allowed “to freely choose their own destiny” after facing what he denounced as a brutal repression that inspires “disgust and revulsion”.

According to the UN, more than 5,000 people have been killed in the continuing crackdown. Syrian authorities say armed groups have killed about 2,000 security forces personnel.

El-Araby said the Arab League would report on the monitors’ first week of work and decide if more were needed. He said 70 monitors were currently working in six cities, and 30 others would arrive soon.

Those already in the country had achieved the release of 3,484 prisoners in Syria, he said.

It was unclear if the number included prisoner releases in the past month announced by the Syrian government. The
government said on December 28 it had freed 755 prisoners.

El-Araby also said he expected Sudanese General Mohammed al-Dabi, chief of the monitoring contingent, to return to Cairo by the end of the week and present a report on what was achieved in the first week of monitoring.

Arab foreign ministers would then decide if the number of monitors should be increased. 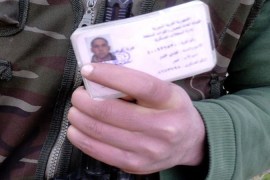 Protests spread across the country, as military defectors organise attacks in attempt to bring down Assad.