Sarkozy also said after talks with Afghan President Hamid Karzai on Friday that French troops would complete their withdrawal from the NATO-led mission in Afghanistan at the end of 2013.

Sarkozy had threatened a possible early pull-out because of the January 20 shooting of unarmed French troops.

France will transfer security in the eastern Kapisa province, where most of the current 3,600-strong French contingent is based, and the scene of the shooting, to Afghan forces from March of this year, Sarkozy said.

“The pursuit of the transition and this gradual transfer of combat responsibilities will allow us to plan for a return of all our combat forces by the end of 2013,” Sarkozy said.

The entirety of NATO forces in Afghanistan are due to leave by the end of 2014, however, Sarkozy said that he and Karzai will ask NATO to hand over all combat missions to Afghan troops in 2013.

“We have decided in a common accord with President Karzai to ask NATO to consider a total handling of NATO combat missions to the Afghan army over the course of 2013,” Sarkozy said.

Sarkozy said France has informed President Barack Obama of the plans, and will present the plan at a meeting of NATO defence ministers early next month.

A NATO spokeswoman said only: “We take note of the French statement.”

Karzai is on a five-day European trip to sign long-term strategic partnership agreements aimed at bolstering support for Afghanistan’s reconstruction and development.

Karzai was due to travel later Friday to London to meet Prime Minister David Cameron.

Most French – 84 per cent of them – want the troops back home by the end of 2012, according to a CSA opinion poll published this week.

Socialist presidential candidate Francois Hollande, who is tipped to beat Sarkozy in elections in three months, pledged on Thursday to withdraw French troops from Afghanistan this year if he becomes president.

After the deaths of the four soldiers, Sarkozy sent his Defence Minister Gerard Longuet to Kabul to evaluate ways to improve the security of the French troops who are training up the Afghan army.

Longuet said he was told the killer was a Taliban infiltrator in the Afghan army, but Afghan security sources said he opened fire because of a video showing US Marines urinating on the dead bodies of Taliban insurgents.

The Taliban, usually quick to claim coalition deaths, said they were investigating and suggested some of the many attacks by Afghan soldiers on their foreign counterparts were prompted by anger towards the “invading enemy”.

The US, Britain, Germany and Italy are the the main contributors to the NATO-led force of some 130,000 troops fighting a 10-year war against Taliban forces ousted from power after the 9/11 attacks in the Us.

A total of 82 French troops have been killed there since the start of their deployment in 2001. 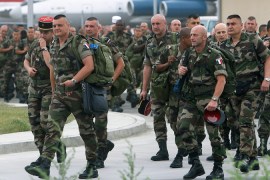 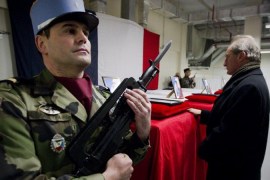