The eurozone crisis, and ways to prevent it from spreading, will dominate the agenda at this year’s World Economic Forum in Switzerland.

Politicians and business leaders are gathering in the resort town of Davos, amid a warning from the International Monetary Fund that Europe’s debt crisis could drag the rest of the world into recession.

About 40 heads of government, including Angela Merkel, the German Chancellor and David Cameron, the British Prime Minister, are attending the five-day forum to discuss issues ranging from the eurozone crisis to Iran’s nuclear programme and trends in science and the arts.

Noticeable by their absence, however, were leaders from Greece, Spain and Italy, the country’s worst-hit by the debt crisis. Greece’s private-sector creditors were set to meet in Paris on Wednesday to “determine the next course ahead” in talks aimed at easing the country’s debt.

Ursula Von Der Leyen, Germany’s labour minister, told Al Jazeera in Davos that a potential Greek default “would not diminish the structural problems we have [in Europe]”.

“Look at the long-term competitiveness of Europe… in the long-term we need work in Germany and Europe. We need a strong Europe,” Von Der Leyen said.

“If we weaken Europe and only look at how to put in money into short-term reactions, we would not be [addressing] the structural problems [or] competitiveness,” she added.

Leaders from the world’s biggest 1,000 companies are also attending, despite the annual membership fee of $45,000.

‘No place’ for capitalism

According to Klaus Schwab, the founder and organiser of Davos, this year’s meeting will focus on how to develop a new world model as “capitalism in its current form, has no place in the world around us”.

“The danger for the world is that the political leadership is overwhelmed,” Schwab, who founded the forum 42 years ago, said on Tuesday as he welcomed delegates. “Maybe what we have here is a kind of burnout.”

UK tabloid The Sun reported on Tuesday that Rolling Stones singer Mick Jagger would be the star attraction at an event organised by Cameron’s office to promote Britain.

But after news of his appearance leaked out, Jagger, who received a knighthood from Queen Elizabeth in 2003, revealed he had had second thoughts.

“During my career I have always eschewed party politics and came to Davos as a guest, as I thought it would be
stimulating… I have always been interested in economics and world events,” Jagger said in a statement.

“I now find myself being used as a political football and there has been a lot of comment about my political allegiances which are inaccurate. I think it’s best I decline the invitation to the key event and curtail my visit.”

About 5,000 Swiss soldiers have been mobilised to provide security over the course of the gathering while the airspace over the exclusive resort has been severely restricted.

A small group of anti-capitalist activists have made their way to Davos, building a protest igloo. Half a dozen demonstrators appeared briefly outside the security perimeter on Tuesday, painting anti-capitalist slogans in the snow. 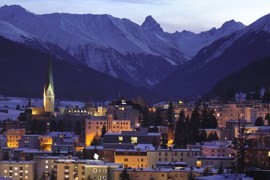