Divers have found another body inside the stricken Italian cruise ship Costa Concordia, bringing the official death toll to 16 as salvage crews prepared to pump 2,380 tonnes of fuel from its tanks.

The body was found on the third deck, where some of the 114,500-tonne vessel’s lifeboats were located, with rescuers declining to give further details.

As navy divers blew a new hole in the ship on the third deck, to aid rescuers searching for 16 people still missing after the crash, a large pontoon with a barge attached could be seen operating near the vessel.

Emergency workers had pulled the bodies of two women from the wreck on Monday, saying that they were found near the luxury liner’s internet cafe.

Italian Maria D’Introno, 30, identified late on Monday, was on the cruise with her husband and in-laws, who were celebrating their 50th wedding anniversary. They were just settling down for dinner when the accident happened.

Too scared to throw herself into the sea along with the others despite having a life jacket, D’Introno stayed on the sinking ship as it keeled over after running aground on January 13.

Other victims include Hungarian Sandor Feher, 42, who helped children into a lifeboat before heading back towards his cabin to get his violin, and Frenchman Francis Servel, 71, who gave his wife his lifejacket. She survived.

Meanwhile, crews from Dutch company Smit Salvage, on the Tuscan island of Giglio, were looking for the best way to access the Costa Concordia‘s 23 fuel tanks before syphoning the oil out of the ship beached on the rocky shoreline.

“The company’s divers will carry out underwater operations which will probably take two days,” said Claudio Chiavacci, who is co-ordinating joint operations by salvage workers and rescuers searching for missing people.

The Costa Concordia went down on January 13 with 4,229 people on board. It emerged on Tuesday that Italian prosecutors were looking into the cruise ship operator’s possible role in the wreck and reports of a chaotic evacuation.

“The employer is the guarantor and is responsible. We have to look at the choices made by the operator,” Beniamino Deidda, chief prosecutor for the region where the disaster occurred, was quoted by Italian media as saying.

“For now the attention has been on the fault of the captain, who turned out to be tragically incompetent. But who chooses the captain?”

The prosecutor also pointed to multiple problems with the evacuation, including a lack of preparation for the emergency among crew members.

‘Looking for a scapegoat’

Captain Francesco Schettino is under house arrest, accused of manslaughter, causing a shipwreck and abandoning ship.

His wife said in an interview published on Tuesday that she was outraged over the way her husband had been portrayed by the media.

“My husband is at the centre of an unprecedented media storm,” Schettino’s wife, Fabiola Rossi, told French magazine Paris Match.

“I cannot think of any other naval or air tragedy in which the responsible party was treated with such violence … This is a man hunt, people are looking for a scapegoat, a monster.”

The head of Italy’s civil protection agency, Franco Gabrielli, said the salvage workers were likely to begin syphoning off the oil by Saturday, and would start by emptying six large tanks holding half of the ship’s oil.

The coastguard has said that emptying the fuel tanks will take weeks.

Smit will carry out a so-called “hot-tapping” operation, which involves pumping the fuel out into a nearby ship and replacing it with water so as not to affect the ship’s balance and stop it from slipping into the open sea.

The race is now on to empty the ship’s fuel tanks, as environmentalists warn that an oil spill would be a catastrophe in Europe’s biggest marine sanctuary. 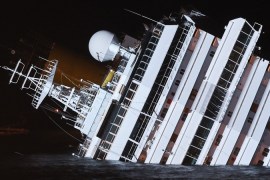 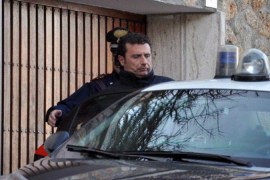 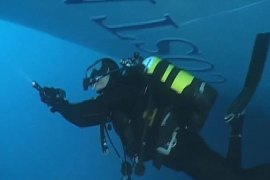 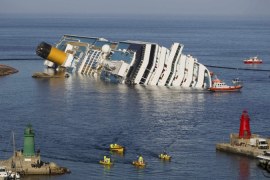