Egypt’s new lower house of parliament has convened its first session just days after completing a historic election that put Islamists in the legislative lead after the fall of former president Hosni Mubarak in February.

Mahmoud al-Saqa, 81, a member of the liberal Wafd party and the oldest member of parliament, opened the session in the capital, Cairo, on Monday as acting speaker, beginning with a moment of silence for those killed in the uprising against Mubarak.

The Muslim Brotherhood’s Freedom and Justice party, which took roughly 43 per cent of the People’s Assembly, nominated its secretary-general, Saad el-Katatni, to be speaker of the house, and his nomination was duly approved by the body during the session.

“We want to build a new Egypt, a constitutional, democratic and modern Egypt,” said Katatni, who won 399 out of 496 votes cast in the poll for the position.

“Democracy will be the source of our parliament’s power,” he added in remarks greeted with applause.

Al Jazeera’s Rawya Rageh, reporting from outside the parliament building in Cairo, said currently the session’s duties are largely procedural but Egyptians are waiting to see how the people’s assembly will interact with the military rulers.

“There is a lot of talk of backroom deals between certain Islamist groups and the military, but there is no confirmation on this,” she said.

“People want to see if they will be able to move beyond the procedural matters, and move towards a political consensus.

“[The parliamentarians] understand the level of expectation of the Egyptian people.”

As members of the parliament took their oaths of office, there was some moments of controversy, as certain members attempted to add lines of their own, including invocations to either God or the revolution. The acting speaker, who was administering the oaths, insisted that all members swear an identical oath, without reference to religion or the uprising that toppled Mubarak.

The FJP has vowed to guide Egypt through the transition from military to civilian rule while upholding personal liberties. 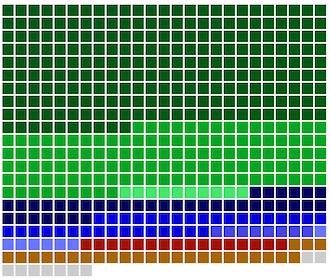 Click for an interactive look at the makeup of the new parliament, with details about each political party and alliance

The Brotherhood has pledged not to ally with the ultra-conservative Nour Party, which largely represents Egypt’s fundamentalist Salafi community and came in second, winning around 21 per cent of available seats.

The rise of the Islamists marks a stark change from the Mubarak era, when parliament was a compliant body dominated by a supermajority of his National Democratic Party (NDP).

The Brotherhood was officially banned, and though its members won an unprecedented fifth of parliament in 2005 by running as independents, in practice no party but the NDP could ever affect legislation.

The Supreme Council of the Armed Forces (SCAF), which took power on February 11, have promised to remain in charge only until a presidential election in June, though many Egyptians suspect the army may seek to cling on to power from behind the scenes even after that.

“It will be a historic session in Egypt’s transition to democracy and civilian rule,” Mohamed Beltagy, a leading member of the Freedom and Justice Party, said on Sunday.

“Today we resume the revolution. We have wasted a year. We have work to do,” said Kamal Abu Etta, a prominent labour union activist and member of the non-religious Karama party.

The SCAF handed over legislative powers to the lower house of parliament on Monday, according to a statement from the country’s cabinet.

“Field Marshal Hussein Tantawi, the head of the Supreme Council of the Armed Forces, has announced in a letter to the people’s assembly the transfer of legislative power to the assembly,” the cabinet said on its Facebook page.

Youth movements, who sparked and led Egyptians in the 18-day revolt against Mubarak, said they would demonstrate outside the assembly to ensure protesters killed in the uprising were not forgotten.

They are barely represented in the People’s Assembly. After the FJP and Nour, whose coalitions combined make up 70 per cent of the lower house, there is the Wafd, an eight-decade-old party with eight per cent, and the Egyptian Bloc, a new liberal coalition led in part by billionaire telecom mogul Naguib Sawiris, which won almost seven per cent.

“We do not contest the popular mandate of parliament, but it better deliver on the rights of martyrs and wounded. We fear political parties may vie for political gain and ignore the youth,” activist Mohamed Fahmy said.

Though liberals and youth harbour suspicions and even fears of the Brotherhood and the Salafis, most agree that the main obstacle to a democracy is the military council, which has failed to reform the loathed security forces and halt military trials of civilians. Military police have also attacked and killed demonstrators on multiple occasions.

The Brotherhood represents the most powerful counter to the military, and though its members have said they are willing to negotiate with the SCAF during the transition, the two sides have clashed over the powers of the new parliament.

“We say that we respect and appreciate the army but the military council must be held accountable for any mistakes … No one is above accountability,” the Brotherhood’s general guide, Mohamed Badie, said last week.

Some analysts have suggested the army will not fully abandon politics unless the Brotherhood and other prominent political parties offer guarantees that it will not face legal retribution over the killing of protesters.

Mubarak, 83, is now on trial for his role in the deaths of 850 people during the uprising. Scores of people have been killed in sporadic eruptions of violence since then, including demonstrations against army rule in November and December.

A Brotherhood source said its members would form a human chain around parliament to stop any protest turning violent.