Madagascar’s former leader, Marc Ravalomanana had attempted to end his exile and return home, but his flight was forced to turn back after authorities in the Indian Ocean island closed their airspace to prevent his return, the ex-president’s spokesman said.

Peter Mann, a spokesman for Marc Ravalomanana in Johannesburg, said airline officials told him the plane would refuel in Mozambique before returning to South Africa

In Madagascar, where more than 50,000 people lined the streets outside the airport in Antananarivo, the Madagascar capital, hoping to greet him, a government minister told reporters that Ravalomanana’s rival, Andry Rajoelina, had issued a notice closing the country’s main airports to prevent Ravalomanana’s return.

Ravalomanana, 62, was deposed by a popular DJ, Andry Rajoelina, and fled to South Africa in 2009.

An earlier attempt to return home in 2011 ended in Ravalomanana’s detention at the airport in Johannesburg, after Madagascar’s security officials denied him permission to land.

Elections are planned for 2013 in the island nation. Ravalomanana is expected to stand.

Rajoelina, who is 37, has been accused by rights groups of dragging the country into a morass of corruption.

Many people see Ravalomanana’s return as a beacon of hope.

However, with tensions running high in the country, a crisis meeting was held on Saturday among members of the Madagascar government.

“I have just discussed with the prime minister. He said everything was OK,” Ravalomanana announced before departing from the Johannesburg airport.

Omer Beriziky, the prime minister, took office in November, heading a government that was agreed by consensus among Madagascar’s main political parties, under a regionally brokered road map to steer the nation towards the planned elections.

That deal allows the return of political exiles, and Didier Ratsiraka, a fellow deposed leader, recently returned from exile in France without incident.

The agreement explicitly called for Ravalomanana to be allowed to return and for the transitional parliament to ratify an amnesty for “all political events” between 2002 and 2009 except for war crimes, genocide or major human-rights violations.

But an “explanatory note” attached to the deal cast doubt on whether existing convictions would in fact be cleared.

Ravalomanana was sentenced to life in prison and hard labour for the death of 30 opposition protesters killed by his presidential guard in February 2009. Security forces had said Ravalomanana would be arrested on arrival.

“The arrest warrant will be executed. It’s a court decision, we cannot allow it not to be executed,” General Richard Ravalomanana, head of security for the province that includes Antananarivo, said.

So far, other senior leaders have remained silent on his return.

Madagascar has been isolated by the international community since Ravalomanana’s removal, with the African Union and the Southern African Development Community suspending its membership until a return to constitutional order. 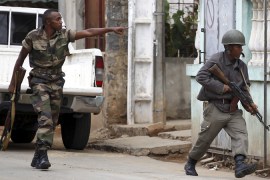 Political instability has severely damaged a main economic source for the island country. 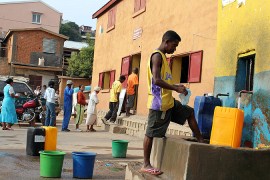 Three-quarters of votes cast in referundum are in favour of new constitution, provisional results show. 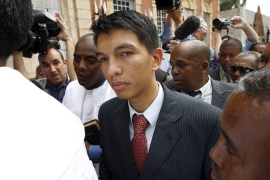 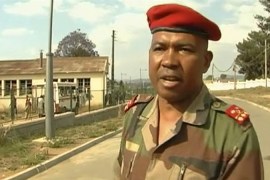 Madagascar’s army chief has visited the dissident officers in their barracks just days after their failed coup attempt.