At least eight people have died and many more are feared missing after a boat carrying dozens of passengers hit another vessel and capsized off the Kenyan island of Lamu, the Kenya Red Cross has said.

Nelly Muluka-Oluoch, a spokeswoman for the organisation, said 20 survivors had been found so far and the boat – which overturned on Sunday evening – may have been carrying up to 80 passengers.

She said rescue teams were searching for more survivors into the night.

The boat was taking people from Lamu to the nearby mainland when it hit the other vessel.

A Lamu resident at the hospital on Lamu Island said 13 passengers, including five children, had been admitted for
treatment after being pulled from the water.

He said the small ferries typically take up to about 50 passengers from the island to the mainland, but survivors said
the boat was overloaded with people and baggage.

“The boat was carrying 80 people. So far seven bodies have been taken to the mortuary and there are 20 survivors so far,” she said.

Officials in Lamu said they were still trying to determine the exact number of passengers and how many people had managed to make it to shore but did not yet have precise figures.

Kenyans flock to the Indian Ocean coast over Christmas and New Year for holidays and Lamu is a popular tourist destination.

Overloading was blamed for another ferry disaster off the Indian Ocean coast in neighbouring Tanzania in September.

More than 200 people died when the MV Spice Islander sank as it sailed from Zanzibar to Pemba island. 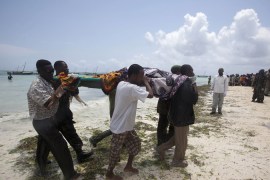 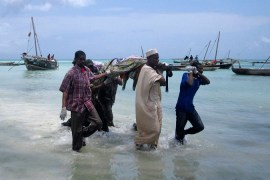 Almost 200 dead and many still missing as vessel capsizes off coast of East Africa.