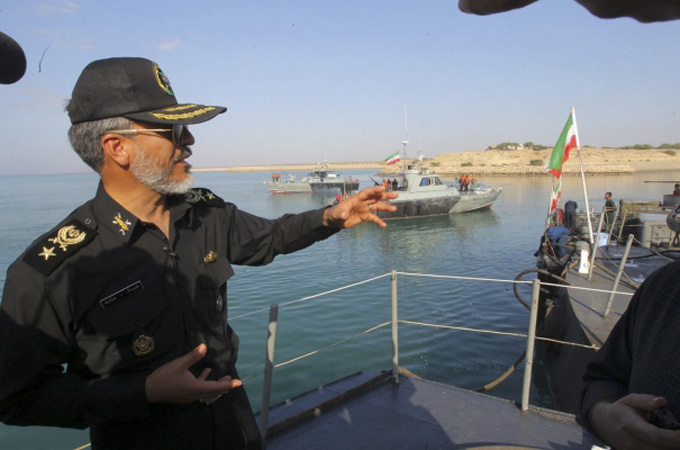 Iran has threatened to block the Strait of Hormuz, a key oil shipping route, in response to an international oil embargo [EPA]

Iran has warned its neighbours in the Gulf not to make up for any shortfall in its oil exports caused by Western sanctions.

A new round of US sanctions approved last month targets the Iranian central bank, making it more difficult for Iran to sell oil abroad, though the US has delayed implementing those sanctions by six months.

And the European Union has agreed in principle to block imports of Iranian oil; it could reach a final decision on the embargo within the next week.

Those sanctions would almost inevitably create a shortfall in world markets: Iran is the second-biggest oil producer in OPEC, behind only Saudi Arabia; it pumps some 2.5 million barrels per day, and earns $75bn annually from those exports.

Ali al-Naimi, Saudi Arabia’s oil minister, said over the weekend that his country would make up for any shortfall caused by the embargo. But Iran warned on Sunday that oil producers would face unspecified “consequences” if they boost their output.

“We would not consider these actions to be friendly,” said Mohammad Ali Khatibi, Iran’s OPEC envoy. “If the oil production nations on the Persian Gulf decide to substitute Iran’s oil, then they will be held responsible for what happens.”

Relations between Iran and Saudi Arabia have long been tense, and they worsened last year over allegations of a plot to assassinate the Saudi ambassador in Washington.

‘They are standing ready’

The question of a shortfall has been a key issue during EU debates over the proposed embargo. Alain Juppe, the French foreign minister, said earlier this week that “other countries” had agreed to increase their production in order to keep world oil prices from spiking.

“The producers don’t want to talk about it, but they are standing ready,” Juppe said.

The proposed EU sanctions would likely give oil producers “grace periods” on their existing contracts, allowing them time to find alternative suppliers outside Iran.

Tensions have been mounting for weeks over the proposed embargoes. Iran warned last week that it would respond to international oil sanctions by blocking the Strait of Hormuz, the narrow waterway through which one-fifth of the world’s oil is transported.

The United States has described such a move as a “red line,” suggesting Iran would face a US military strike in response.

The sanctions are part of a growing Western effort to pressure Iran to abandon its nuclear programme. Analysts say several rounds of sanctions are beginning to take a toll on the Iranian economy. The Iranian rial fell earlier this month to an historic low against the dollar.

A spokesman for Iran’s foreign ministry, Ramin Mehmanparast, said the proposed embargoes are part of a US-led effort to “eliminate economic rivals in the world.”