Pakistan’s prime minister has dismissed the country’s defence secretary in a move likely to escalate tensions between his civilian government and the country’s powerful military.

Gilani’s decision comes against the backdrop of a scandal involving an unsigned memo that apparently sought US help in stopping a possible coup by the army following the killing of Osama bin Laden on Pakistani soil by US forces in May.

Pakistan’s supreme court has set up a judicial commission to investigate the memo.

As part of the investigation, General Ashfaq Kayani, the army chief, and Lieutenant-General Ahmed Shuja Pasha, the head of the Directorate for Inter-Services Intelligence, or ISI, submitted statements to the supreme court in which they suggested the memo was part of a conspiracy against the army.

Lodhi was viewed as having more power than the civilian defence minister because of his direct links to the army high command. He will be replaced by Nargis Sethi, who will fulfil the responsibilities of defence secretary in addition to those of her current post, cabinet secretary. Sethi is seen as a close ally of Gilani.

In a separate development, local media reported that the army had appointed a new commander to the Rawalpindi-based 111 Infantry Brigade, a unit of the Pakistan army’s X Corps that has historically been involved in military coups. The army said the posting was “routine”, and was made as a result of the previous commander being promoted.

Shortly before news of Lodhi’s dismissal broke, the military issued a statement objecting to claims made by Gilani in an interview with a Chinese news outlet that army and intelligence chiefs had acted unconstitutionally in the “memo-gate” scandal.

Gilani said security officials had not sought the permission of the defence ministry before filing their statements at the supreme court.

“There can be no allegation more serious than what the honourable prime minister has levelled,” the military said in a reference to Gilani’s comments, which were made while Kayani was in Beijing on an official visit.

“This has very serious ramifications with potentially grievous consequences for the country.”

Gilani said Kayani had contacted him before the military statement was released, informing him that he wished to issue “a clarification”.

The memo scandal broke three months ago when an American businessman of Pakistani origin, Mansoor Ijaz, writing in a column in the UK’s Financial Times newspaper, said a senior Pakistani diplomat had earlier in the year asked that the memo be delivered to the US defence department for help in reining in the military.

Ijaz later identified the diplomat as the then Pakistani ambassador to the US, Husain Haqqani, an ally of President Asif Ali Zardari who was never liked by the military for his strong views against the institution.

Haqqani denied any connection with the memo, but resigned as ambassador.

The news prompted a series of meetings among the top leadership of several of Pakistan’s political parties. Local media reported that Kayani was due to meet the military’s senior leadership on Thursday.

A parliamentary session has also been scheduled for Thursday.

Speaking to the media about the day’s developments, Nawaz Sharif, the leader of the country’s main opposition PML-N party, called for fresh parliamentary elections be held “as soon as possible”, but rejected the option of using “unconstitutional or undemocratic” means to do so, an allusion to the possibility of a military coup.

Gilani asserted that elections to the country’s upper house of parliament would be held as scheduled in the coming months, and that “all institutions will work under a civilian government”.

Distrust between civilian leaders and the generals has plagued the nuclear-armed South Asian country for almost its entire existence, with the military ruling for more than half of its 64-year history after a series of coups.

In December, Zardari flew to Dubai for medical treatment sparking rumours that he had fled the country anticipating a coup. Both Zardari and Gilani belong to the governing Pakistan People’s Party.

The supreme court is also set to rule next week on another case, regarding the controversial National Reconciliation Ordinance (NRO), that could also see the dismissal of the government.

It wants the attorney general to open corruption proceedings against Zardari over a once shelved case, something the government is refusing to do.

The judges said on Tuesday that they could move to institute proceedings against Gilani unless he followed their order to pursue the case against Zardari.

Speaking to Al Jazeera, Rasul Baksh Raees, a Lahore-based professor of political science and analyst, said the move to sack Lodhi was an attempt “to politicise” the memo-gate scandal and NRO cases.

“I think they [Gilani’s government] want to confront the military establishment,” he said. “They have already been in confrontation with the supreme court for the past two years, and now they think since the memo-gate issue is going to hang heavy on their necks, the best political strategy would be to not defend themselves in court, rather to take a political course …  and attack the armed forces and the court.”

Raees said that rather than risk a “direct intervention”, the military was more likely “to stand behind the constitution” and “use the courts to defend [itself]”. 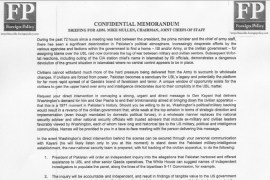 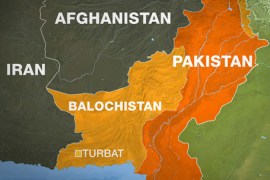 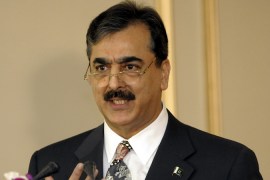 Gilani says certain institutions behave like a state within a state, but army chief rejects “speculations” of takeover. 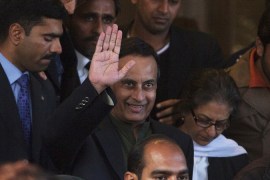 Setback for government as investigation is ordered into alleged bid to seek US help to rein in the powerful military.