Myanmar’s government and one of the country’s most prominent ethnic rebel groups, the Karen National Union (KNU), have signed a ceasefire after decades of civil conflict.

A delegation of ministers from the capital Naypyidaw and senior members of the KNU signed the pact in Hpa-an, the capital of eastern Karen state, an AFP news agency reporter witnessed on Thursday.

The military-dominated government, which came to power in March last year after decades of outright army rule, has been trying to reach out to ethnic groups as part of reforms seemingly aimed at ending its isolated status.

Civil war has gripped parts of the country since its independence in 1948, and an end to the conflicts, as well as alleged human rights abuses involving government troops, is a key demand of the international community.

‘This time we trust them’

Prior to the negotiations, a leading KNU member known as Brigadier General Johnny expressed optimism over the talks with the government.

“This time they didn’t ask us to give up our arms, they just want to work for equal rights for ethnic groups,” he told the AFP news agency. “This time we trust them.” But he added: “We have been fighting for 60 years and one meeting alone will not end it.”

Vast numbers of villagers in Karen state have been forced to flee and tens of thousands of these refugees live in camps across the border in Thailand.

Rights groups say government forces over the years have deliberately targeted civilians, driving them from their homes, destroying villages and forcing them to work for the army.

In December, a ceasefire deal was reached between the local government and the Shan State Army-South, another major ethnic guerrilla group, based in northeastern Shan state.

The pact followed talks near the Thai-Myanmar border with some of the several ethnic groups in a long-running struggle for greater autonomy and rights, including the KNU.

Other promising moves by the new government have included talks with democracy champion Aung San Suu Kyi, who has been allowed to stand in an April by-election, and the halting of an unpopular Chinese-backed mega dam.

The United States and the European Union however have called for more progress before they lift economic sanctions, calling in particular for the release of hundreds of political prisoners and an end to ethnic conflict.

Despite encouraging dialogue with some ethnic groups, fighting in northern Kachin state between the army and rebels since June last year has displaced tens of thousands of people.

The conflict has continued despite President Thein Sein ordering the army to halt operations, according to global campaign group Refugees International. 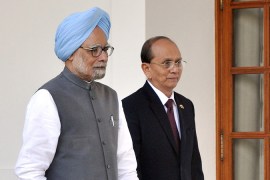 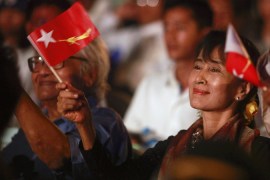 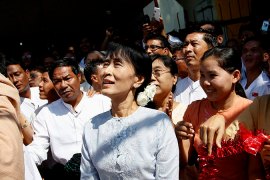