Another person was killed when a bomb attached to a car carrying pilgrims exploded in Baquba, in Diyala province, 65km northeast of the capital.

The attacks came after a wave of bombings on Thursday that killed more than 70 people and has further deepened the country’s sectarian divide at a time of ongoing crisis in government. Two more Shia pilgrims were killed on Friday.

Most of the attacks have been aimed at Shias commemorating Arbaeen, a period ending 40 days of mourning following the anniversary of the death of Imam al-Hussein, the grandson of the Prophet Muhammad.

Meanwhile, in the southern city of Basra, about 400 people staged a protest on Saturday to denounce a decision by Iraqi president Jalal Talabani, a Kurd, to shelter the country’s top Sunni politician after an arrest warrant was issued against him.

The standoff over al-Hashimi is at the heart of an ongoing political crisis pitting the leaders of the country’s mostly ethnic- and sectarian-based party blocs against each other.

The protesters demanded Talabani hand over his deputy so that he can stand trial.

Demonstrators hoisted Iraqi flags and banners reading “The Iraqi people demand a trial for al-Hashemi,” and “Talabani is behind the sectarian turmoil” while chanting “No to Talabani” and “No to terrorism.”

Al-Hashimiis staying in a guesthouse owned by Talabani in Iraq’s semi-autonomous Kurdish region in the north – effectively out of reach of state security forces.

Some analysts fear that the political crisis, combined with the withdrawal of US forces, will create an atmosphere in which armed groups can rebuild themselves. 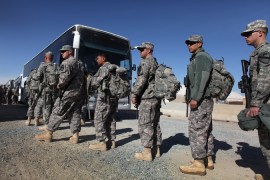 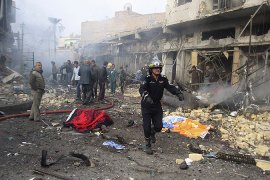 At least 70 killed and more than 100 wounded in the latest attacks in mainly Shia areas across the country. 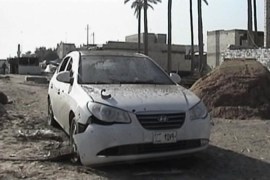