A military prosecutor in western Poland has shot himself in the head after defending the work of his office and rejecting planned reforms.

Colonel Mikolaj Przybyl survived the shooting on Monday that happened inside his office in the city of Poznan, minutes after he read a statement to reporters and then asked them briefly to leave the room.

Przybyl is a deputy head of the prosecutor’s office in Poznan and the head of a local department investigating organised crime in the army.

Footage shown by Polish broadcaster TVN24 station, whose camera was left rolling after reporters left, shows Przybyl walking across his office and out of sight before a gunshot can be heard.

Hospital director Leslaw Lenartowicz said Przybyl was in stable condition, conscious, and his life was not in danger.

Przybyl suffered injuries to the face, he said. President Bronislaw Komorowski and Jaroslaw Gowin, the justice minister, were closely monitoring an investigation into the shooting, their offices said.

Some legislators are calling for a special parliament probe into the case, saying that Przybyl’s statement suggests a massive corruption problem in the army.

Moments before shooting himself, Przybyl read a statement to reporters in which he objected to plans by Andrzej Seremet, the prosecutor general, to put military prosecutors under civilian authority.

“I have never discredited the Republic of Poland and with all firmness I will defend the honour of a Polish Army officer and prosecutor. Thank you, I have finished the briefing and I want to ask you to leave for a minute. I need a break. (stands up) When everyone leaves, I will ventilate the room.”

Seremet said that such a decision was under discussion, but had not been made yet.

Przybyl also said that military prosecutors were proving themselves competent in the many probes that they have opened into organised crime cases inside the army.

The probes primarily concern suspicions of corruption in buying equipment for Poland’s troops on missions in Afghanistan and, earlier, in Iraq.

Przybyl denied media suggestions that the military prosecutors broke the law while investigating the 2010 crash of the presidential plane in Russia when President Lech Kaczynski and 95 others were killed.

The media has reported that the prosecutors had unlawfully sought billing lists and text message content of mobile phones of some reporters to determine the source of leaks to the media.

Seremet and Parulski denied that prosecutors were eavesdropping on reporters.

Seremet defended the investigators’ right to see billing lists – but not the text messages – if vital for a probe. He said a court is to decide whether the prosecutors were entitled to seek reporters’ billing lists.

Shortly after the incident Seremet said: “I am absolutely amazed by what has happened,the positive information is that the prosecutor’s life is not endangered.

“Doctors say that his wounds will heal Mr. Przybyl will recover. I am sure that he will, and I wish him all the best in this. I want to add that the police are at the scene and all the necessary procedures are being carried out.”

The Smolensk crash investigation remains a very sensitive political issue for Poland and for its relations with Moscow.

Parulski said Przybyl had faced numerous threats, including a break-in at his flat and damage to his car, aimed at intimidating him and stalling other investigations the prosecutor was leading over possible financial misconduct within the army.

Parulski accused Seremet, his civilian supervisor, of acting unethically by seeking a separate analysis into the work of the military prosecutors and making it public before a court ruling.

That is why Przybyl had lately been carrying a gun, Parulski added. President Bronislaw Komorowski said in a statement he was “concerned” about the incident and asked the national security bureau to monitor the situation.

Jaroslaw Kaczynski, who leads the main opposition party and was twin brother of the late president, has accused prime minister Donald Tusk’s government of collaborating with Moscow to cause the crash and of later conniving with Russia to cover up its real causes.

The government says such claims are absurd.

Since taking office in late 2007, Tusk has tried to improve relations with Moscow that have long been strained over energy, security and other issues. But disagreements over the investigation into the Smolensk crash have chilled the atmosphere. 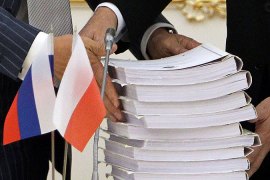 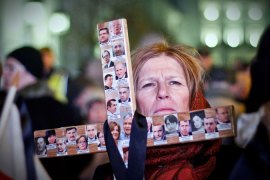