One of the young Libyan rebels credited with capturing Muammar Gaddafi in a drainage ditch nearly a year ago has died of injuries after being kidnapped, beaten and slashed by the slain leader’s supporters.

A private jet flew the corpse of the 22-year-old Omran Shaaban to the coastal city of Misrata on Tuesday where his family, friends and well-wishers were waiting.

He had shot to fame last year with several photographs and videos showing him grabbing Gaddafi at the moment of his capture on October 20, 2011, in Sirte, before he was killed.

Gaddafi was killed later that day by revolutionary fighters.

The death of Shaaban, who had been hospitalised in France, raises the prospect of even more violence and score-settling.

The newly elected National Congress has authorised police and the army to use force if necessary to apprehend those who abducted Shaaban and three companions in July near the town of Bani Walid.

Libya is battling lingering pockets of support for the old regime, and its government has been unable to rein in armed militias in a country rife with weapons.

Earlier this month, a demonstration at the US consulate in the eastern city of Benghazi turned violent, killing four Americans, including the US ambassador.

Shaaban was praised as a “dutiful martyr” by the National Congress, although his family says he never received a promised reward of 1 million Libyan dinars ($800,000) for capturing Gaddafi.

The Libyan government has said it will honour Shaaban with a funeral befitting a hero.

“All the accusations are that Gaddafi loyalists were behind his kidnapping and torture,” Al Jazeera’s Hoda Abdel-Hamid reported from Benghazi on Wednesday.

“His funeral procession on Tuesday night was an impressive affair. The coffin, wrapped in the national flag, was taken to a sports stadium in Misrata where thousands of people paid their last respects.”

Photos on social media websites showed a wooden coffin with a glass window that revealed Shaaban’s face, with white gauze covering his head.

In the capital, Tripoli, several hundred protesters gathered outside the headquarters of the National Congress to demand that the government avenge Shaaban’s death.

Shaaban’s family said that he and three friends had been en route home to Misrata from a vacation in July when they were attacked by armed men in an area called el-Shimekh, near Bani Walid.

Shaaban and his friends, who like many Libyans were armed, fired back, the family said.

Two bullets hit Shaaban, and he was paralysed from the waist down, his relatives said.

The men were captured by militia members from Bani Walid, a town of about 100,000 people that remains a stronghold of Gaddafi loyalists and is isolated from the rest of Libya.

President Mohamed al-Magarief visited Bani Walid this month and secured the release of Shaaban and two of his companions. A fourth is still being held.

When Shaaban was finally brought home, he was “skin and bones” – still paralysed, frail and slipping in and out of consciousness, according to his brother, Abdullah Shaaban.

“It was clear he was beaten a lot,” Abdullah Shaaban said. “His entire chest was sliced with razors. His face had changed. It wasn’t my brother that I knew.”

Omran Shaaban later was flown to France for medical treatment.

Shaaban, the second youngest in a family of nine children, was a member of Libya Shield, a loose coalition of the country’s largest militias relied on by the defence ministry.

Khalifa al-Zawawi, the former head of Misrata’s local council, said the government reneged on paying the reward to Shaaban.

Abdullah Shaaban said his brother did not mind, saying he considered capturing Gaddafi to be his national duty.

Magarief released a statement on Tuesday pledging that those responsible for the violence against Omran Shaaban would be punished.

However, apprehending and disarming the fighters in Bani Walid are among the most daunting tasks facing the government.

The town is heavily armed with rocket-propelled grenades, automatic weapons and artillery left over from last year’s civil war.

In another development on Tuesday, former rebel fighters calling for more recognition from the authorities briefly exchanged fire outside the National Congress in Tripoli, members of the body said.

Libya’s army on Sunday ordered rogue armed groups in and around the city to leave state and military premises or be ejected by force, apparently seeking to capitalise on the withdrawal of militias from Benghazi and Derna.

“They started fighting among each other, first just hitting each other and then exchanging fire,” Nizar Kawan, congress member, said, adding that some protesters were carrying banners saying “do not sideline the revolutionaries”.

“Some of them were saying they should end the protest, others did want to and it escalated.”

A second congress member, who declined to be named, said that politicians were evacuated to a nearby hotel.

“Security forces closed off the area and started shooting in the air to stop the protesters.” 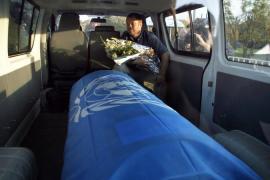 Abduction and death of the man who found Muammar Gaddafi underscores deep rift with ex-leader loyalists in Bani Walid. 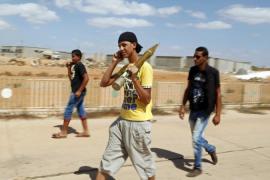 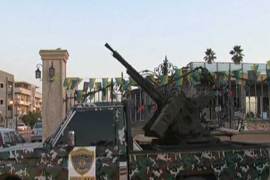 President orders that all militias either join armed forces or be disbanded, amid public anger over death of US envoy. 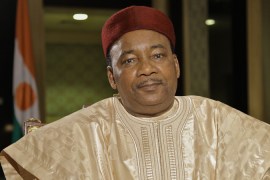 ‘It was not necessary to kill Gaddafi’

Niger’s president is anxiously watching events in neighbouring Mali that he says were triggered by the Libyan uprising.