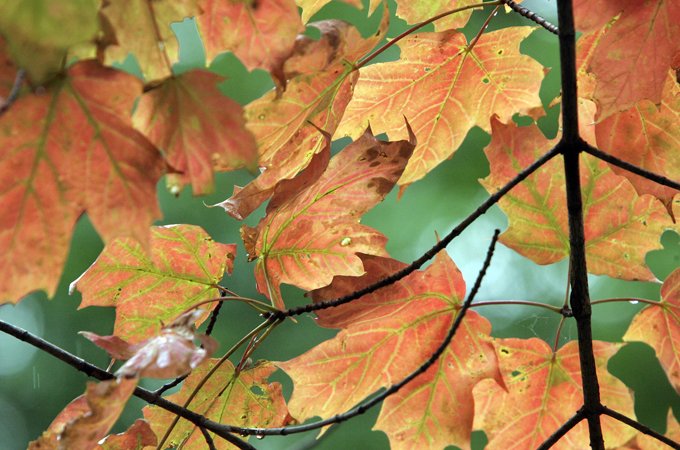 As summer comes to an end, the colour of autumn is already visible in the picturesque leaves around Indiana. [AP]

September 22 in the northern hemisphere marks the end of summer and the beginning of autumn. It is also the time of the year when trees make a colourful transformation.

It is a spectacular site to see as deciduous forests in North America, Europe and Asia, slowly have their leaves change from green to reds and golds.

Why this happens this time of year may surprise you. Many believe that as we go from September into October, it’s the lower temperatures that cause the change in colour, but that’s not exactly the reason.

Let’s first go back a few months in the life span of a leaf and look at the reason that it’s green to begin with. The leaves of the tree are its own individual food factories. Water is taken in through the tree’s roots, while taking carbon dioxide in through the leaves.

With the help of sunlight, a process in the leaves called photosynthesis occurs. This is when carbon dioxide is changed to oxygen and glucose. The oxygen is released into the atmosphere and the glucose is used for food and energy in the tree. A bright green leaf indicates that food production for the tree is at full capacity.

Now, let’s come back to today when the days are to getting shorter. As every day elapses, there is slightly less and less sunshine to help in the photosynthesis process, which then begins to shut down the factory, in a sense.

As the leaf begins to die, the veins into and out of the leaf also begin to constrict. The green chlorophyll disappears, leaving the leaf with small amounts of colour that had been there all the time such as yellow and oranges.

The leftover colour is usually dependent on the types of tree. In maple trees, it is some leftover glucose trapped in the leaves that give it the bright appearance of red and purple. In oaks, which normally turn a brown, it is determined by leftover waste in the leaves.

While the autumnal colour change in the foliage is normally associated in the northern hemisphere, there are a few places south of the equator that can also catch a glimpse of this natural wonder. In the months of March and April, New Zealand, eastern Australia, Patagonia and the Falkland Islands will all see their leaf bearing trees make the switch from green to golds.