A suicide bomber has killed at least 15 people and severely wounded several more in a restaurant in the centre of Somalia’s capital Mogadishu, witnesses said.

The attack on Thursday, the latest in the war-ravaged city where al-Qaeda linked al-Shabab fighters have vowed to topple the government, marks one of the first times several new upmarket restaurants recently set up by the members of Somali diaspora have been targeted.

“I saw eight people killed in the blast, and around them there were many wounded, many of them with severe wounds,” said Hassan Ibrahim Abdullahi, who was in the restaurant at the time.

Al Jazeera’s Peter Greste, reporting from the Kenyan capital Nairobi, said police were in desperate need of training to deal with this type of threat, adding that this was a challenge for the new government.

“The restaurant is a popular place for journalists, for government workers, which appears to be why it was targeted … people involved in the administration,” he said.

Others said they feared the death toll could rise further, after the critically wounded were taken to hospital.

“There was a loud explosion, there were at least eight killed, and there were two more that were rushed to hospital who looked like they would not survive,” said Ali Mohammed Yassin, another diner in the restaurant.

The bomber targeted the Village Restaurant, run by Somalis who had returned to their country from Britain, an eatery popular with other influential Somalis as well as the few foreigners living in the city.

The restaurant is opposite the National Theatre, and about a kilometre from the presidential palace. Often hailed as a symbol of revival for Mogadishu, set up following the al-Shabab’s pullout of fixed positions in the city last year.

Augustine Mahiga, the special representative of the UN secretary-general to Somalia, said he was appalled by the violence.

“I strongly condemn this cowardly and senseless attack. These acts of terrorism cannot reverse the recent achievements that Somalia has witnessed,” Mahiga said.

“Such incidents can only reinforce the determination of the Somali people to reject violence and engage in peaceful
resolution of conflict.”

After over two decades of anarchy and war, the seaside city has seen modest improvements since the al-Shabab left frontline fighting positions, with a boom in building and businesses.

However, the hardline fighters switched to guerrilla attacks in Mogadishu – including suicide bombings – and remain a potent threat.

Al-Shabab officials said they would issue a statement concerning the attack, but did not claim or deny that they were responsible.

The attack comes as the al-Shabab face growing pressure on the last major city they hold – the southern port of Kismayo – where Kenyan troops with the African Union force alongside Somali militia gunmen are battling towards.

The key al-Shabab-held towns of Afgoye, Baidoa and the port of Marka have all fallen in recent months, with the fighters largely retreating in advance of assault. 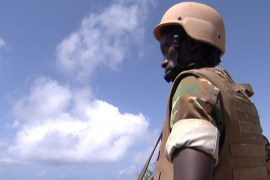 Forces remain on alert in southern Somalia though armed group seems to have fled its stronghold, Marka. 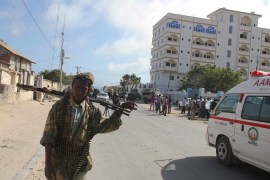 At least eight killed in assault on Mogadishu hotel where newly elected president was meeting with Kenyan dignitaries. 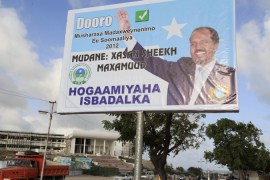 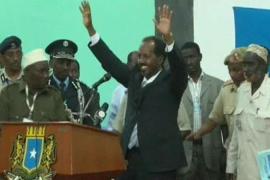 Somalia election bigger than its result

First peaceful political transition in decades raises the possibility that the country just might have turned a corner.