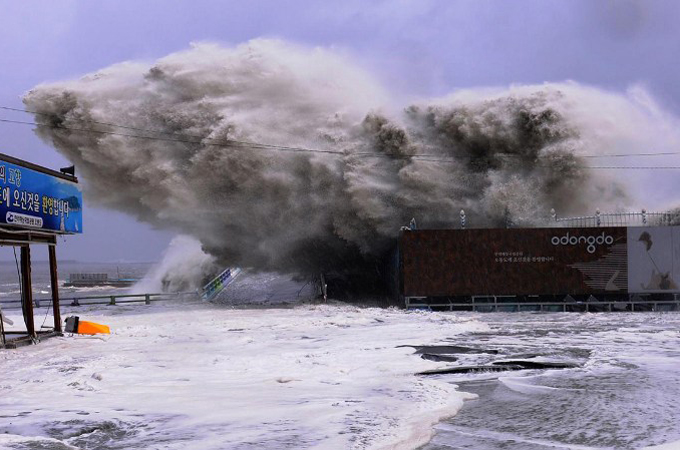 Typhoon Sanba slammed into the south coast of South Korea, with winds of up to150 kilometres per hour. [AFP PHOTO / YEOSU CITY]

Sanba, the third major storm to hit South Korea in two months, made landfall at the southern port city of Yeosu around 3 GMT (midday local time).

The storm, the equivalent of a category one hurricane, has already brought havoc to the other parts of the region.
Sanba formed to the east of the Philippines, on September 9, and although the storm didn’t make landfall, it intensified the monsoon rains already falling across the country. The north island of Luzon is still suffering from the widespread flooding that resulted.

Sanba then strengthened as it headed northwards, becoming a powerful Super Typhoon, the strongest tropical cyclone in the world so far this year.

Fortunately by the time the storm reached the Japanese islands, it had weakened slightly.  Sanba powered through Okinawa with sustained winds of 200kph, causing 100,000 homes to lose power. Flooding was extensive and one person is reported to have lost their life.

The storm continued to roar northwards over cooler seawaters, allowing it to gradually weaken, but it was still bringing excessive amounts of rain.

The island of Jeju, off the coast of South Korea, reported 372mm of rain. Roads were damaged by the flooding and 10,000 homes are still without power.

By the time Sanba made landfall in South Korea, it had weakened to the equivalent of a category one hurricane, with winds of approximately 150 kph. Flights and ferry services were cancelled, trees were uprooted and advertising billboards were ripped down.

Severe storm alerts were issued across the entire country, with as much as 300mm of rain expected in the coastal districts by the time the storm clears away.

Sanba is quickly disintegrating as it crosses South Korea. It is expected to pass briefly over the Sea of Japan, before crashing back into the border of North Korea and Russia around 0 GMT on Tuesday.