Thousands of Egyptian demonstrators have torn down the Stars and Stripes at the US embassy in Cairo and replaced it with an Islamic flag on the annniversary of the September 11, 2001, attacks in the US.

Nearly 3,000 demonstrators, most of them hardline Islamist supporters of the Salafist movement or football fans, gathered at the embassy in protest over a film deemed offensive to the Prophet Muhammad which was produced by expatriate members of Egypt’s Christian minority resident in the United States.

A dozen men scaled the embassy walls and one of them tore down the US flag, replacing it with a black one inscribed with the Muslim profession of faith: “There is no God but God and Mohammed is the prophet of God.”

Demonstrators also daubed part of that slogan – “There is no God but God” – on the walls of the embassy compound.

Asked whether the flag the protesters hoisted on the anniversary of the killing of nearly 3,000 people in Washington, New York and Pennsylvania was that of the Al-Qaeda movement culprits, a US state department official said she thought not. 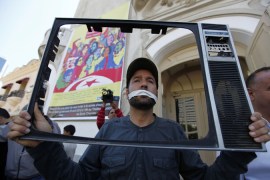 Was the revolution lost in Tunisia and Egypt?

As state censorship threatens freedom of expression, we ask if new leaders have adopted the old practices of oppression. 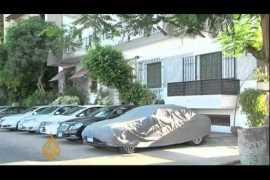 Electricity and intrigue in Egypt

Angry Egyptians who have to endure power cuts on a daily basis are blaming the crisis on the president.