A Bahrain court has upheld jail sentences against 20 opposition figures convicted of plotting to overthrow the Western-allied government, including eight prominent activists facing life in prison.

Tuesday’s decision is likely to deepen the nearly 19-month-long crisis between Bahrain’s Sunni rulers and Shia-led protesters demanding a greater political voice in the strategic Gulf kingdom, which is home to the US Navy’s 5th Fleet.

The group on trial includes some of the most high-profile leaders. Among the eight sentenced to life is rights activist Abdulhadi al-Khawaja, who staged a 110-day hunger strike earlier this year in protest. The other 12 have lesser prison terms, ranging from five to 15 years, with seven of them convicted in absentia.

Mohammed al-Tajir, a human-rights lawyer, told Al Jazeera: “We are shocked at this judgment. The judge dismissed the appeal”.

The decision could also escalate street clashes that have occurred nearly nonstop since the Arab Spring-inspired uprising began in February 2011. More than 50 people have been killed in Bahrain’s unrest.

“We totally reject today’s verdict, which is clearly not a step toward beginning to solve the issues in Bahrain,” said former parliament member Abdul Jalil Khalil, a member of the country’s main Shiite political bloc, Al Wefaq.

Shia represent about 70 per cent of Bahrain’s more than 500,000 citizens, but complain they face systematic discrimination, such as being excluded from top government and security posts.

Bahrain’s Sunni rulers have set in motion a series of reforms, including giving more powers to the elected parliament, but opposition leaders say the measures don’t go far enough to break the ruling family’s near monopoly over government control.

The anti-state convictions against the 20 opposition figures were first handed down last year by a military-led tribunal created under temporary martial law-style rules. A retrial was granted, but only limited changes in some charges were made in the hearings, said Jalil al-Aradi, one of the defence lawyers.

The 13 defendants held in Bahrain did not appear in court, and family members were barred under tight security, al-Aradi said. The activists have previously claimed they suffered beatings and other abuses behind bars.

International rights groups have pressed Bahrain to free the group as a sign of outreach to opposition factions, alongside efforts to ease criticism about the government’s political crackdowns from key allies such as the US al-Khawaja, who also has Danish citizenship, also has been the focus of efforts by Denmark to secure his release.

Villy Soevndal, the Denmark foreign minister, called the decision to uphold the life sentence “very disappointing” and said he would discuss possible further international action from “the very broad range of countries that in the spring supported Denmark in the demand for the release of al-Khawaja and the other human rights and democracy fighters in Bahrain”.

“It is important that the international community maintains that Bahrain must respect fundamental human rights,” he said. “This includes not least the freedom of speech and assembly.”

The official Bahrain News Agency said the charges include “plotting to overthrow the regime” and having “foreign intelligence contacts” – a reference to Shiite powerhouse Iran and its proxy, Hezbollah in Lebanon.

Bahraini leaders have accused Iran of having links to the protesters. Tehran has strongly criticised crackdowns against Shiites in Bahrain, but denies any active assistance.

A government statement said the court “provided all assurances of a fair trial” and allowed defence attorneys full access to the defendants. It also said they received “full medical care” in prison.

The activists can appeal to Bahrain’s Supreme Court.

The crisis in Bahrain has pushed Washington into a difficult corner. It seeks to keep it crucial security and political bonds with Bahrain’s leaders, but has increasingly condemned the ongoing violence and urged the country’s rulers to open wide-ranging talks with the opposition.

The US State Department said it was “deeply troubled” by the Rajab verdict last month, and the European Union expressed concern with the sentence. 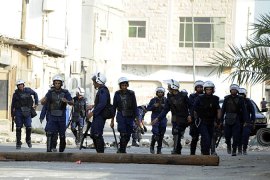 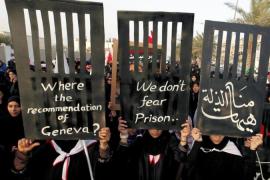 An 11-year-old accused of “joining illegal gathering” tells Al Jazeera how he was chased down while playing in street.